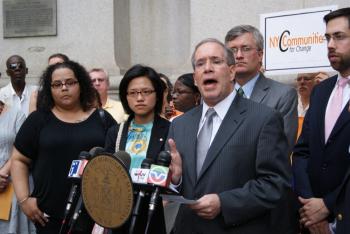 “What you [DOE Chancellor Joel Klein] are telling disabled kids and kids with autism in this school is that they don’t matter,” said Councilwoman Rosie Mendez.

The Department of Education did not return a request for comment as of press time. They are expected to release a statement

“Claiming there is an ‘emergency’ in order to get around the state’s ruling and reduce the size of this school is unfair to students and their families,” said Congresswoman Nydia Velázquez.

Manhattah Borough President Scott Stringer said DOE representatives met with him on Aug. 4, saying that they had “no plan to hurt these [special needs] kids or move these kids.” But, Stringer continued “within 24 hours later, they invoked emergency power, again going after [autistic] children.”