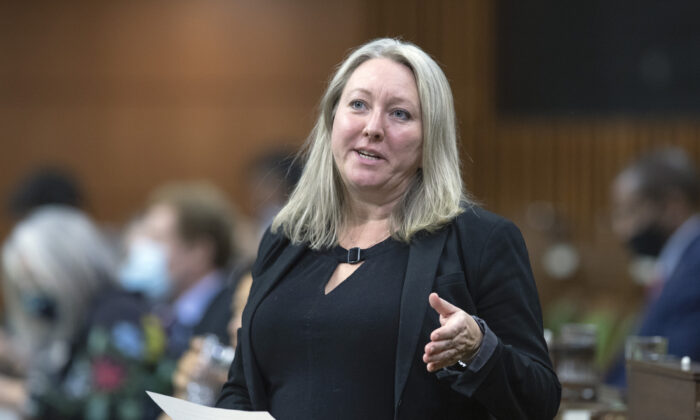 Indigenous-Speaking Federal Employees Will Not Receive a Bonus, Treasury Board Says

Federal employees fluent in one or more indigenous dialects will not receive a language bonus, said Treasury Board President Mona Fortier.

Currently, federal employees who are fluent in both English and French—Canada’s official languages—receive a “bilingualism bonus” worth $800 annually.

When reporters asked Fortier if the Treasury Board would approve an indigenous-speaking bonus for federal employees, she responded that the board would continue “to explore” how indigenous public servants can work in either English, French, or both, according to Blacklock’s Reporter.

“Currently we are continuing to explore and make sure to work with Indigenous public servants so they can obviously serve Canadians in one of the two official languages they know or both for those who know both,” Fortier said.

The federal government began paying annual bonuses to employees who could write in both English and French in the late 1800s and introduced a 7 percent bilingual bonus in 1966.

A reporter directly asked Fortier if she would support extending the bilingualism bonus to indigenous speakers, to which she replied that the board is “firmly committed to protecting and promoting our two official languages.”

This comes just a few months after the United Nations declared 2022–2032 to be the “International Decade of Indigenous Languages.”

Throughout the decade, the U.N. aims “to draw global attention on the critical situation of many indigenous languages and to mobilize stakeholders and resources for their preservation, revitalization, and promotion.”

The government also announced it would pass the “Indigenous Languages Act” within the decade, which will “support and promote the use of Indigenous languages” and help indigenous peoples “reclaim, revitalize, maintain and strengthen” their dialects.

Fortier said in the Treasury Board’s 2022 “Supplementary Estimates” that the government would spend over $3.5 million to “support priorities for Indigenous communities” in 2022.

“The government continues to invest in Indigenous communities, Canadians’ health, well being, and security, while also recognizing the importance of supporting international partners who share our democratic values,” Fortier said in a news release.

Data collected during the 2016 census showed that over 260,000 Canadians could speak an aboriginal language—21 percent of whom were not indigenous by birth—Statistics Canada reported.

Statistics Canada also said the percentage of indigenous people fluent in an aboriginal dialect declined from almost 30 percent in 1996 to 16 percent in 2016.

However, the total number of Canadian aboriginal-language speakers—including both indigenous and non-indigenous people—rose by 8 percent during that time.