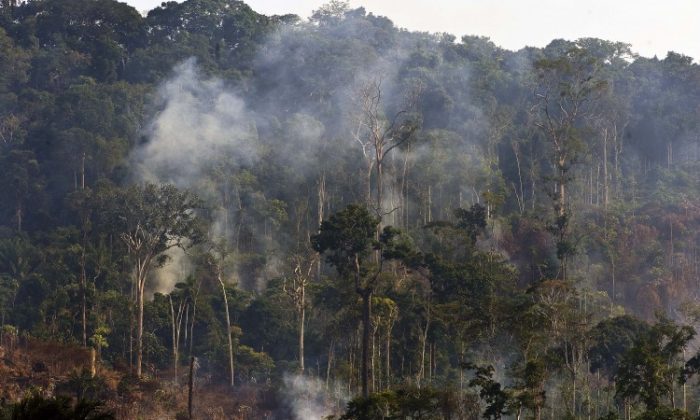 Trees of the Amazon rain forest burn in northern Brazil to clear land for cattle raising. New research on the savannas of French Guiana has discovered indigenous people farmed the area for hundreds of years without using fire. (Antonio Scorza/AFP/Getty Images)
Science

Indigenous people living in the savannas around the Amazonian forest 800 years ago farmed their land sustainably and without using fire, new research led by the UK’s University of Exeter has discovered.

Reintroducing these traditional farming methods to the region could help to preserve the natural ecosystem that is being rapidly destroyed by burning, industrial agriculture, and cattle ranching, the researchers said in their study, published online in the Proceedings of the National Academy of Sciences.

By studying charcoal fragments, pollen, and plant remains in a sediment core that goes back 2,150 years, the international team was able to chart the change in land use in coastal French Guiana before and after the “Columbian Encounter” (CE) of 1492—when the arrival of Europeans decimated indigenous populations through the introduction of diseases.

“The peat core revealed that this particular region of the coastal savannas of French Guiana was a flooded savanna between around 200 BC and 1200 AD, which was then reshaped into an agricultural landscape by the construction of raised-field systems by pre-Columbian farmers, and the latter were ultimately abandoned after around 1540 as a consequence of the Columbian Encounter,” explained lead researcher Dr. José Iriarte of Exeter University in an email.

In the “raised-field” system, the farmers planted their crops on mounds of earth created using wooden tools. These raised platforms provided the farmers with easier access to their crops, better soil drainage and aeration, and increased soil fertility. Though the system is labor intensive, modern experiments have shown it to be highly productive.

Surrounding the mounds were drainage channels—important in an area that is seasonally flooded—which could be used for fish and turtle farming. The muck that collected in the bottom of the channels could also be used as a renewable source of fertilizer.

The raised-field system had the effect of limiting fires in what is otherwise a fire-prone area with a long dry season, said the researchers. This had benefits as fire destroys nutrients and organic matter in the soil.

In the years following the arrival of Europeans in 1540, and a decline in the indigenous population, raised-field farming was abandoned. The flooded areas were drained by canals, and a different form of agriculture was introduced by colonial farmers, which resulted in a significant increase in fires, the researchers found.

The results of this study are the opposite of what is seen in the more tropical regions of the Amazonian forest. Previous research has shown that fire was used extensively to clear land for agriculture, leading to a build up of charcoal in the soil.

“This is due to different land use management techniques in these two different areas. Pre-Columbian farmers were practicing slash and burn agriculture in the forest (leaving a lot of charcoal in the soils and lake sediments where we retrieve our information), a practice that substantially diminishes after the CE with the decimation of their numbers.”

Previously, researchers assumed fires were also a regular feature of farming on the savannas.

“It was speculated that all these tropical savannas were subjected to regular anthropogenic fires in pre-Columbian times,” said Iriarte. “We now know this was not always the case. … And there are more surprises to come. Amazonia is a large and diverse place with a long history of human occupation.”

“This ancient, time-tested, fire-free land use could pave the way for the modern implementation of raised-field agriculture in rural areas of Amazonia,” Iriarte said in a press release.

“Intensive raised-field agriculture can become an alternative to burning down tropical forest for slash and burn agriculture by reclaiming otherwise abandoned and new savannah ecosystems created by deforestation. It has the capability of helping curb carbon emissions and at the same time provide food security for the more vulnerable and poorest rural populations.”