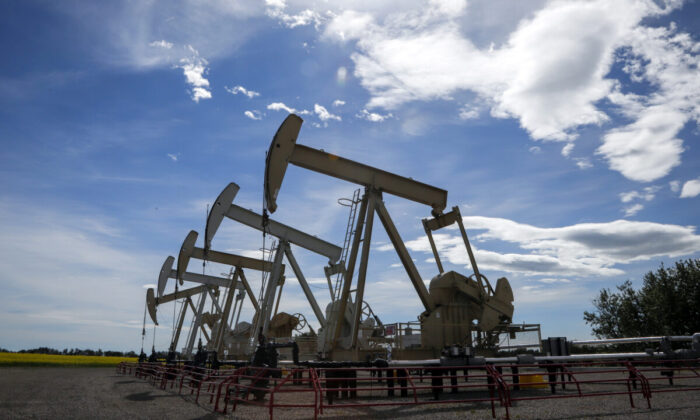 Pumpjacks draw oil out of the ground near Olds, Alberta, on July 16, 2020. (The Canadian Press/Jeff McIntosh)
Canada

Indigenous leaders advocating for First Nations oil and gas producers are urging the Alberta government to adopt the Allan Inquiry report’s recommendations that would support First Nations energy development in the face of anti-oilsands campaigns.

Stephen Buffalo is president and CEO of the Indian Resource Council (IRC), which represents more than 155 oil- and gas-producing First Nations across Canada. In a press release issued on Dec. 6, the IRC urged Alberta Premier Jason Kenney to adopt Commissioner Steve Allan’s recommendations in the provincial legislature, including Allan’s advice to use “elders wisdom panels” in constructive intermediation for resource development.

“It’s an important report just for the fact that it identifies that there is some interference, we’ll call it, with these organizations funding an attack on our natural resources. And it does have some economic impacts. First Nations are at the cusp of doing business—we’re partners, we’re equity owners with industry—so this hurts those nations that have these partnerships in place,” Buffalo told The Epoch Times.

“We want to protect the Earth, but at the same time we can’t continue down this road: [our oil and gas] being landlocked and our partnerships not thriving as they should.”

Allan was appointed as commissioner in July 2019 to lead the public inquiry into foreign-funded campaigns targeting Alberta’s energy industry. The Allan Inquiry, launched by Kenney’s government, released its final report in October this year.

A November 2020 report by Ken Coates, senior fellow at the Macdonald-Laurier Institute, noted that oilsands operators from nearly 400 indigenous-owned businesses in 36 Alberta indigenous communities spent more than $3.3 billion in procurement in 2015 and 2016.

Coates also said in his report that when the Northern Gateway pipeline was cancelled, 31 First Nations, which owned one-third of the project, lost $2 billion worth of benefits.

Buffalo says First Nations are “stuck” with limited funding under the Indian Act but experience “a game-changer” if they can partner with energy projects.

“They’re able to deal with a lot of the things you see in the [news]paper—handle the social pathologies, the opioid crisis, the murdered missing indigenous women, our housing crisis—and the biggest one is meeting the needs for clean water,” he said.

“The government has shown that they’re not going to do it for our nations, so it’s just about time we do it ourselves.”

In his report, Allan said the elders wisdom panels were a crucial component of this recommendation. The panels would include First Nations leaders and elders as well as representatives from industry and the science and technology communities, he wrote. He also said he believed the panels would help the formulation of a natural resource development strategy and be a positive public relations strategy.

“[The panels would] breach the divide, not only within and between First Nations communities, but also to advance greater understanding among all Canadians of First Nations issues, as well as the responsible stewardship of Canada’s natural resources,” he wrote.

Allan also noted in his report that Deloitte Forensic Inc., which was hired to assist in the public inquiry, found that a number of U.S. foundations had provided some C$102 million to First Nations environmental initiatives, projects, and programs for the period 2003 to 2019. These First Nations were opposed to energy development projects, while others had signed agreements to join those projects.

“ENGOs and many Indigenous spokespeople leverage these special rights of First Nations to oppose pipelines and oil and gas development while other First Nations leaders decry the opportunities threatened or lost by the failure of infrastructure projects to proceed. This creates serious divisions between various First Nations communities and within communities,” Allan wrote.

Buffalo believes elders wisdom panels could help facilitate understanding and heal the divisions. Lawyer and former grand chief Wilton J. Littlechild, who was one of the three commissioners of the Truth and Reconciliation Commission of Canada, agrees that the panels could help facilitate energy resource development amidst the federal adoption of the United Nations Declaration on the Rights of Indigenous Peoples (UNDRIP).

“Commissioner Steve Allan’s recommendations must not be ignored,” Littlechild said in the IRC release.

“UNDRIP provides a unique and necessary framework for the advancement of economic development among Indigenous Peoples, business partners and communities. The Allan Inquiry recommendations should be acted upon as they are a call for us to work together.”

“The nice thing about this is it has been made very clear, the elders aren’t necessarily going to say no … and that’s a huge change from the way it was not that long ago,” he said.

“We need to trust indigenous communities. If we don’t trust them at some point, you’re never going to have a long-term solution to all of these issues. We really have to do it. There’s just no question. So the issue really is how soon can we get going.”

The Canadian Centre for Energy Information, which is part of Statistics Canada, analyzed employment income among full-year, full-time indigenous workers in 2016 and showed that those in the oil and gas extraction industry and pipeline transportation industry had the highest incomes, at $144,034 and $142,883 respectively. This was more than triple the $47,596 average for full-year, full-time indigenous workers as a whole.