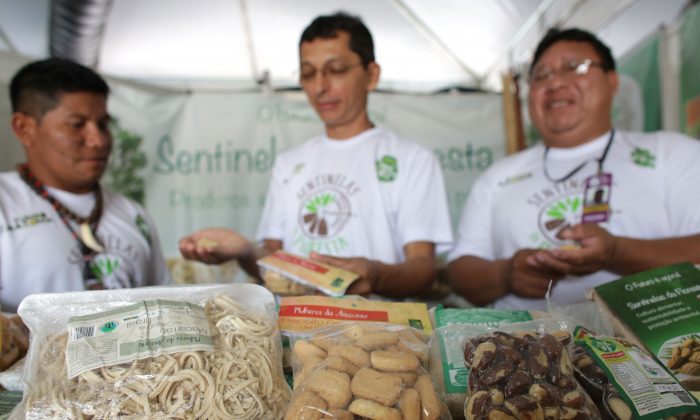 Cinta Larga indigenous men sell products made from Brazil nuts during a fair on the sidelines of the Indigenous World Games in Palmas, Brazil, on Oct. 28, 2015. Since it started last year, the Sentinels of the Forest program has boosted the tribes’ incomes by 50 percent, said Daeit Akata Kaban, leader of the Cinta Larga. Shown are program coordinator Paulo Cesar (C), Valdenildo Saul (L), and Daeit Akata Kaban (R). (AP Photo/Eraldo Peres)
Americas

PALMAS, Brazil—The creation story of the Cinta Larga people holds that they were born out of the fruit of the Brazil nut tree.

Now they are betting that the mighty tree could be the key to their very future in the Amazon rain forest.

A project sponsored by international donors has helped the Cinta Larga and other indigenous people from Brazil’s Mato Grosso state monetize the towering centenary trees by turning their nuts, which normally plummet to the forest floor and rot, into cash.

Since it started last year, the Sentinels of the Forest program has boosted the tribes’ incomes 50 percent, said Daeit Akata Kaban, leader of the Cinta Larga. That’s given the group of about 1,700 people renewed incentive to protect their roughly 80,000 hectares (2 million acres) of ancestral forest from loggers, ranchers and poachers pressing in on all sides.

“It has completely changed our lives,” Kaban said at the group’s stand at the World Indigenous Games, a celebration of cultures from around the world wrapping up this weekend in Palmas.

The project was the brainchild of Paulo Cesar Nunes, an agronomist whose family moved from Sao Paulo to the forest state of Rondonia on Brazil’s western frontier to harvest Brazil nuts. Growing up, Nunes witnessed the catastrophic results of a government project to resettle landless farmers in Rondonia, which led to nearly wholesale clear-cutting in the state.

Nunes believes the Brazil nut can help prevent a similar fate for neighboring Mato Grosso, which is in the sights of big agricultural interests as a frontier for soy, cotton, corn and cattle.

Securing $1.25 million from the Fundo Amazonas, a fund of international donors that is administered by the Brazilian government’s national development bank, he set up a Brazil nut cooperative in Juruena, a town roughly halfway between the Cinta Larga’s reserve and another where the Cayabi, Apiaka and Munduruku peoples live.

Brazil nut trees dot the region, and the melon-sized shells containing the nuts naturally tumble to the forest floor during the rainy season, meaning harvesters just have to pick up the shells. But the oily nuts’ susceptibility to fungus, bacteria and insects make getting them to market before they rot tricky.

The Power of Pau D’arco – Herbal Remedies and More

Sentinels of the Forest built 18 storage facilities throughout the forest to keep the nuts fresh and dry while awaiting processing.

The project has also invested in industrial drying machines that allow them not only to sell the nuts whole but also to extract the oil, which is used for cooking and also as an ingredient in shampoos, face creams and lotions. Brazilian cosmetics firm Natura buys oil from the group.

The dried meal left over from the extraction process is used to make cookies, noodles and granola bars that the federal government distributes to 40,000 local residents through its “Zero Hunger” social program.

“It really gives our harvesters a sense of pride to see their children and friends and neighbors consuming the product they picked with their own hands,” said Nunes. “Not only do we contribute to the food security of the region, but our harvesters are also doing a kind of policing of the forest, checking for invaders as they’re out on their rounds.”

Some 350 people, including tribe members and local family farmers, work on the project, which in its first year generated nearly $100,000. The initial harvest was 130 tons, but ambitions for the future are big: The warehouses have capacity to stock 1,000 tons—and with 875,000 hectares between the two indigenous reservations, there are plenty more nuts to be collected.

“They’ve told us, ‘Too bad this project didn’t exist 20 years ago,'” Nunes said. “If it had, lots more forest would still be standing today.”