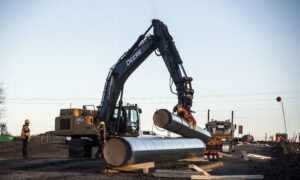 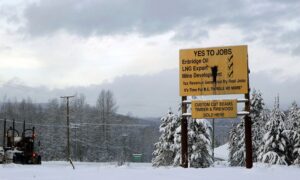 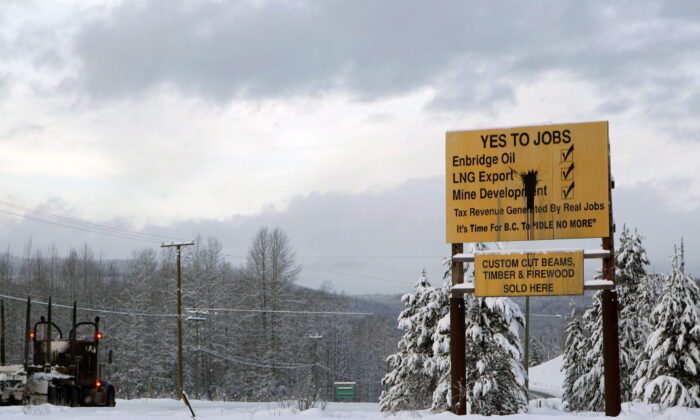 Signage in favour of resource development is seen along Yellowhead Highway near Telkwa in northern British Columbia on Jan. 10, 2019. (The Canadian Press/Chad Hipolito)
Canada

Jean Paul Gladu grew up north of Thunder Bay at Sandpoint First Nation, also known as Bingwi Neyaashi Anishinaabek. The former head of the Canadian Council for Aboriginal Business and now president of the Alaska-Alberta Railway Corporation says he recalls how his grandfather helped build the TransCanada gas pipeline.

“The oil and gas sector is one I truly support,” Gladu said. “Unfortunately, a lot of the media portrays all of us with one colour—that we’re opposed to resource development—and that’s the furthest thing from the truth. Many of our communities are supportive.”

That’s no surprise to Heather Exner-Pirot, research adviser to the Indigenous Resource Network. She says that 38 Indigenous reserves currently produce oil and gas and that 108 reserves have agreements with oil and gas companies. First Nations have collected $1.29 billion in production royalties in the last decade.

“No other sector except mining comes as close to oil and gas in contributing to Indigenous prosperity in terms of jobs, wages, own-source revenues, and business development,” Exner-Pirot said.

“The path to Indigenous economic self-determination runs inevitably through resource extraction. The math does not work otherwise.”

Gladu and Exner-Pirot made their comments at a webinar on Aug. 20 hosted by the Macdonald-Laurier Institute to discuss the evolution of Indigenous involvement in the energy economy. The discussion built on a recent paper by MLI senior fellow Ken Coates titled “Indigenous Engagement with the Canadian Energy Economy: How Far We’ve Come.”

Oil, gas, and mining provide eight of the ten highest-paying professions in the North American Industry Classification System. These jobs fetch six-figure wages, whereas the median earnings for hunting and trapping are $7,144 annually. Even for Indigenous women, the top four highest-earning occupations are in oil and gas and pay three to four times the median wage of $26,207, Exner-Pirot said.

Nearly 8 percent of those who work in oil and gas extraction are Indigenous—twice the average in other industries.

Stephen Buffalo, who also spoke at the event, grew up on the Samson Cree Nation 100 kilometres south of Edmonton. He spent 15 years with the Peace Hills Trust.

“We’ve seen some good years of royalty [payouts], but we didn’t know much about the industry and the social problems that come with that type of injection of money,” Buffalo said.

“We made changes … we found a balance.”

Samson Cree created a heritage trust fund of $350 million and put five firms in charge of investments. The fund now has $560 million, with some earnings used to fund community projects.

“We’ve definitely learned the ugly stuff within the industry, especially when oil was $120 a barrel,” Buffalo said.

“We were more or less run over by industry and government. And lo and behold, our industry fell [due to low oil prices]. But the silver lining is [that] when we hit the ground, we hit the ground together. And we realized we need to work together. We can’t settle things in court. Nobody wins.”

“We need to find a way to eliminate the Indian Act, in my view. It’s a form of self-communism,” he said with a laugh.

“When chief and council get a budget from the federal government, it’s basically managing poverty. It’s a system that does not work and it will continue not to work unless we make the changes ourselves. And I think this natural resource sector is the way to do it.”

Coates agreed. “An awful lot of this effort is really about autonomy,” he said.

“It’s about giving First Nations the capacity to run their own affairs and determine their own future, and to develop a greater separation from their welfare dependency that quite frankly has locked up First Nations Indigenous communities for the last century or more.”

Important changes have happened this century and continue to unfold. Exner-Pirot said that the “duty to consult,” which was imposed by the Supreme Court of Canada in 2005, has led to many more benefit agreements between resource companies and First Nations, leading to jobs for band members and money for the band.

“Business and industry are starting to see that it makes business sense as well as ethical sense to have these big partnerships, that there is a win-win situation that can be attained if we do this right,” she said.

Exner-Pirot said nearly all Indigenous people she talks to support the United Nations Declaration on the Rights of Indigenous Peoples (UNDRIP). She believes, however, that legislation that affirmed UNDRIP, such as Bill C-262 in Ottawa and Bill 41 in British Columbia, “muddied the waters and made it worse” because neither bill defined the parameters for what “prior and informed consent” really means.

“Look at what happened with Wet’suwet’en, when you have 20 First Nations that are in support of a project, [but] you have one community that has governance challenges between elected and hereditary. So that hereditary [community], does that veto the prosperity of 20 other communities that want to support this project?”

Gladu said pipelines are worth a second, third, and fourth effort.

“The hard work has to get done. And just like any relationship you’re going to have your ups and downs, but you’ve got to get off your butt the next morning and get back to the table and figure out your relationship. It’s way too easy to say ‘I give up.’ This country can’t have that.”