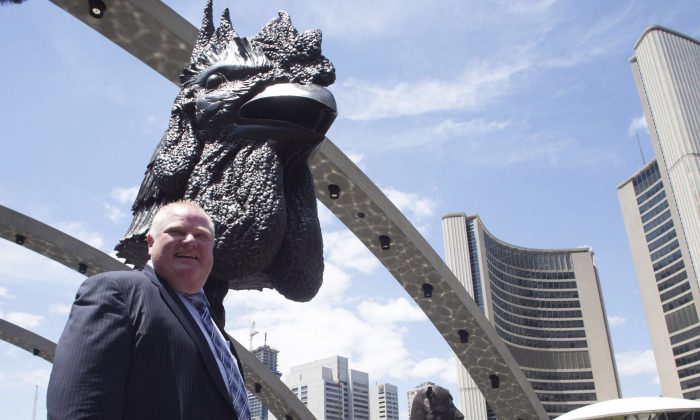 Mayor Rob Ford attends the unveiling of Chinese artist Ai Weiwei's sculpture series near City Hall in Toronto on June 18, 2013. A campaign that raised $200,000 to purchase an alleged video appearing to show Ford smoking crack was a “beautiful example” of the fundraising power of the Internet, says Gawker co-founder Danae Ringelmann. (THE CANADIAN PRESS/Chris Young)
Canada

TORONTO—A campaign that raised $200,000 to purchase an alleged video appearing to show Toronto Mayor Rob Ford smoking crack was a “beautiful example” of the fundraising power of the Internet, says the website that hosted the controversial crusade.

The video fundraising campaign was launched by Gawker, a U.S. website whose editor John Cook claimed he’d watched the video, which was being shopped around for $200,000 by drug dealers.

Ford has said the alleged video does not exist and that he does not use crack cocaine.

“It was actually a beautiful example of exactly that, just as people can vote on the ballot to elect what politician they’d like to see, crowdfunding enables people to vote with their dollar to fund what they’d like to see come to life, whether it’s a video of a politician or a baby or a film or what have you.”

Ringelmann dismissed concerns about the money being raised for a transaction with alleged drug dealers.

It is currently unclear where the alleged video is. In a recent posting on the gawker website, Cook said that if it doesn’t surface soon, the money collected through Indiegogo will be given to a Canadian nonprofit devoted to substance-abuse issues.

Ringelmann also announced that Indiegogo is planning how-to crowdsourcing workshops in Toronto and Montreal in the coming weeks and will now accept payments in Canadian dollars, which will reduce fees for users in Canada.

Canada is Indiegogo’s second largest market after the U.S. Among the most successful Indiegogo campaigns launched by Canadians was last year’s bid to raise money for Karen Klein, a 68-year-old bus monitor from Greece, N.Y., who was recorded on video being bullied mercilessly by young students.

It started as a modest campaign to raise $5,000 to pay for a vacation, but after the video went viral more than $700,000 was collected for her.

More recently, a campaign to launch the Matterform 3D Photon Scanner, which scans objects to be reproduced by 3D printers, raised more than $470,000 for two Toronto-based entrepreneurs.

And Canadian metal band Protest the Hero raised more than $340,000 from fans to help produce their next album independently.

The Indiegogo workshops in Canada are scheduled for June 26 in Toronto and July 11 in Montreal.