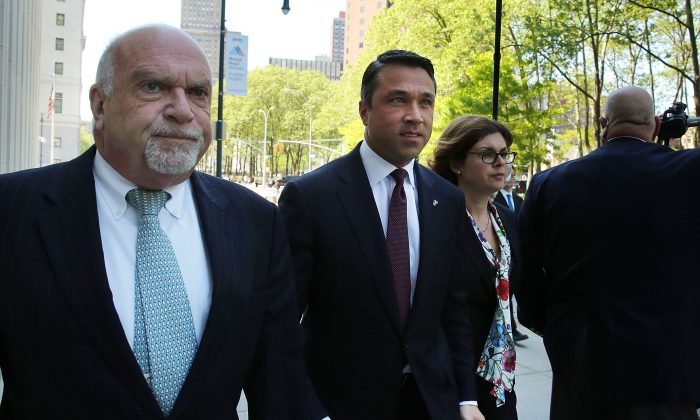 In his second court appearance since the April indictment, Grimm attended a brief hearing before the Brooklyn federal court judge overseeing the case, Pamela Chen.

During the hearing, prosecutors told Judge Chen evidence against the first-term Staten Island congressman included thousands of emails, which have been shared with the congressman’s lawyers.

Grimm pleaded not guilty to all charges through his lawyer when he appeared at the first hearing in April.

The congressman faces a 20-count federal indictment for mail, wire, and tax evasion and fraud charges. Many of the charges stem from a restaurant he owned and helped run called Healthalicious, a small restaurant on Manhattan’s Upper East Side.

Federal prosecutors said the initial investigation into campaign fundraising led them to discover the alleged wrongdoing related to the restaurant.

Grimm has been accused of evading taxes by paying workers in cash, and underreporting sales to the tune of $1 million. He ran the restaurant up until he was elected to Congress in 2010.

Grimm, a former FBI agent, didn’t speak to reporters this time when he left court.