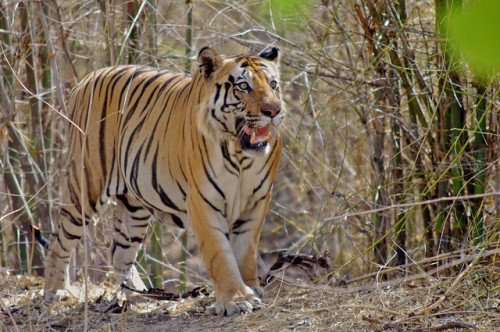 India’s Environment Minister Prakash Javadekar announced on Tuesday, releasing the report of the tiger census conducted in 2014 that India was the only tiger nation that has shown an increase in the number of the wild cat.

“While the tiger population is falling in the world, it is rising in India. We have increased by 30 per cent from the last count. That is a huge success story,” Javadekar said.

He said the main reason for this success was the better management of the 40 odd  tiger reserves in the country.

He said the government was trying hard to reduce man-animal conflict by peacefully negotiating problems between villagers living in the vicinity of tiger reserves and tigers of the area. Such conflicts may trigger when a wild tiger roams in human habitats or when locals encroach the forest land.

For the latest census, apart from relying on the forest guards and volunteers, 9,700 hidden cameras were used to track the tigers.

In 2006, India had its first shocking tiger population estimate when the numbers of the wild cat had plummeted to a measly figure of 1411. That was a huge reduction from the 3700 tigers living in India in 2002. Again, renewed conservation efforts helped raise the number from 1411 to 1706 in 2010 which has now risen again to 2226.

The numbers are not exceptionally good, but it renews hope that the ground work done by hundreds of volunteers, conservation organizations, forest rangers and the government are substantially changing the status of the national animal.

Prompted by the increase in tiger numbers, India’s environment minister Javadker also plans to ‘donate’ tiger cubs to countries that may need them to increase the population in their respective countries.

“India is willing to donate tiger cubs to the international community and play a key role in global tiger conservation efforts.”

“Many countries have asked us for help. It is because the world has understood that there is a need to save this species which may become extinct… whichever country wants tigers from us or wants our cooperation (for tiger conservation), we are ready to give both,” Javadekar added.

India’s rise in tiger numbers is a validation of the efforts taken to protect the national animal. But there are still a number of challenges that persistently hinder these efforts. Here are some quick pointers to the challenges the country might face in keeping tigers from perishing,

Luke Dollar, a big cat conservation biologist and National Geographic explorer, aptly concludes, tigers remain in a precarious position in India and beyond.

“Let’s not jump to celebrate too quickly or begin to relax, because tigers worldwide are still likely less than 5 percent of their population numbers of a century ago,” he says.

India has more resources than some other countries in the tiger’s range and is “showing the world how it’s done,” says Dollar, but many challenges remain, both in poorer countries and in India, where the situation could deteriorate quickly if game managers reduce their vigilance.

For now, it’s time to hail the good news and use it to renew the fight to save the iconic tigers.

This article was written by Atula Gupta, the head administrator for indiasendangered.com. This article is republished with permission, original here.