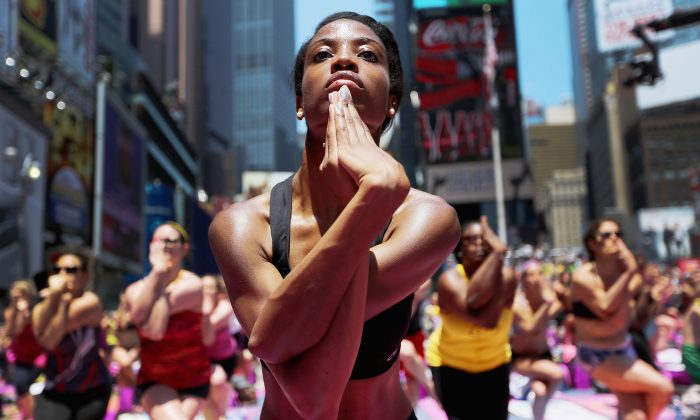 Though its soft power is visible through many manifestations—be it the ancient medical science of Ayurveda for curing many ailments, the curry cuisine, Bollywood, information technology, and what have you—India seems to have left a strong and ever-lasting impact on our daily lives through yoga which is today ubiquitous in much of the world.

Although a large section of the Indian population still lives in grinding poverty and does not even have access to basic sanitation—contrast this with the strides made by China in economic development though it uses its military arsenal and force, euphemized as the “hard power,” to engage in sheer belligerence, as we see it happening in its direct neighborhood, causing anger and distrust in the region—India has built up a soft power pedestal for itself. Yoga’s healing powers are much appreciated today by medical experts who value its attribute of striking a “healthy balance of mind and body.”

The International Day of Yoga has been institutionalized at the U.N. through a General Assembly resolution passed in December 2014; a record 177 co-sponsoring member states passed the resolution, designating June 21 each year as the International Day of Yoga for observance by the United Nations. The first such celebration at the U.N. was held last year—also on June 21.

The idea of declaring an International Day of Yoga at the United Nations was formally proposed by Indian Prime Minister Narendra Modi in his maiden address to the 69th General Assembly on Sept. 27, 2014. Modi had then pointed out that June 21, one of the two solstices, which marks the longest day in the northern hemisphere, had special significance in many parts of the world, and could be considered for adoption as the International Day of Yoga by the United Nations each year. The Indian Prime Minister observed that yoga embodied “unity of mind and body; thought and action; restraint and fulfillment; harmony between man and nature; a holistic approach to health and well-being.”

The President of the General Assembly, Morgens Lykketoft, the chief guest at the U.N. event, was moved by the phenomenon and described it as India’s “unique gift” to the world to practice and benefit. The celebration, led by Sadhguru Jaggi Vasudev, a renowned Indian spiritual figure and a proponent of yoga, explained yogic principles to the crowds at the U.N.

Indeed, just a day before the yoga event, the huge U.N. building was lit with the image of a practitioner demonstrating a yoga posture.

According to Akbaruddin, the event underscored the awareness of yoga as a “holistic approach and not just as physical activity, besides its utility value in achieving the Sustainable Development Goals [SDGs] of the United Nations.”

A spokesman of the Indian permanent mission to the U.N. claimed in a private conversation with this author that participants from more than 100 countries had pre-registered for the event.

But there were also many yoga activities taking place outside the fences of the “glass building,” as the huge United Nations headquarters is sometimes called. The United States found itself locked in the grip of a veritable yoga fever with thousands demonstrating their prowess in, and highlighting the importance of, this mental and physical health-benefitting fitness therapy. The spontaneous display of yoga exercises and postures at New York’s Times Square, a popular haunt of visiting American and foreign tourists, is a unique phenomenon by itself. Huge crowds of practitioners attired in their yoga outfits and armed with yoga mattresses, sit on whatever space is available to them at Times Square to demonstrate their dedication to yoga.

The Indian consulate general in New York, headed by Ambassador Riva Ganguly Das hosted a total of 35 events in a number of states across the United States, partnering with more than 25 associations, organizing special yoga sessions in schools, temples, and even at the JFK International Airport in New York and the Liberty International Airport in Newark, New Jersey, where spectators were treated to a rare yoga spectacle. The Mallakhamb Federation USA gave a demonstration of yoga on poles during a special Sahaja Yoga session held at the consulate.

Yoga, which has been popular in America for decades, was first introduced in the United States by India’s spiritual leader and one of its leading modern thinkers, Swami Vivekanada, in 1893 when he came to the country to attend the World Parliament of Religions in Chicago. Later, yoga was made popular by Maharishi Mahesh Yogi, Paramahansa Yogananda, Yogi Bhajan, etc.

Yoga has become a way of life for many Americans who find it an effective vehicle to reduce the stress they face in their daily lives. Indeed, yoga provides an outlet for letting out this bottled-up stress that can wear down the body and also impact the mind.

Culture has been a potent weapon in India’s arsenal for carving out a growing sphere of influence and goodwill for itself; India’s soft power is visible in almost every field of our daily lives. But this also, invariably, turns our attention to the awe and fear—mind you, not affection and respect—for China’s “hard power;” by “hard power” I mean power attained by sheer brute force which is causing trepidations across the world, particularly in China’s direct neighborhood.

In the end, though, there is greater comfort and acceptance of a country’s “soft power” with all its cultural, culinary, and spiritual manifestations. You don’t win hearts and minds with sheer reprehensible brute force embodied in the “hard power.” History has many examples to show us that brute force does not work in the end: the Roman Empire’s end, for example, was hastened because it relied heavily on force that has its limitations.