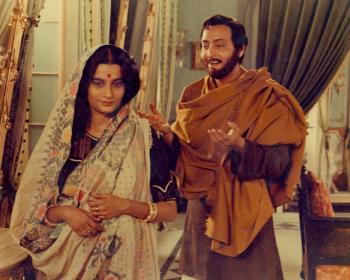 GROWING INDEPENDENCE: A still from The Home and the World. (Satyajit Ray Film and Study Collection/Academy Film Archive)
Entertainment

By Diana Barth
Print
Noted for his brilliant powers of observation, Satyajit Ray is considered among the dozen or so great masters of world cinema, along with Federico Fellini, Ingmar Bergman, Jean Renoir, Yasujiro Ozu, and Akira Kurosawa.

From April 19 through 26, The Film Society of Lincoln Center in New York will honor the great Indian filmmaker with a series titled Long Shadows, which will feature screenings of 11 of his later films ranging from 1971 to 1991.

Ray first came on the international film scene in the 1950s with such offerings as Pather Panchali, The Apu Trilogy, and The Music Room. They established him as a major film director and won him prestigious awards. His later works are marked by a more contemplative mood, but like his entire body of work, display a rich humanism and sense of the universal.

In The Chess Players, two stories commingle—the takeover of India, in the 19th century by the British, set against a pair of old friends consumed by the game of chess. The interweaving of the two elements displays a rich tapestry of a changing culture. The final scene, showing the entry of the British and their goods carried by the camels and elephants of their conquered land, is both poignant and thought-provoking.

In Ray’s last film, The Stranger, an uncle (played by the remarkable Utpal Dutt), who has wandered for more than 30 years, unexpectedly visits his niece and her family. The uncle’s efforts to convince the family that he is not an impostor who has come to take advantage brings forward concepts of ethics, morality, and what it is to be a human being—illustrating Ray’s world view.

Distant Thunder (New York Film Festival ’73) revisits the village from The Apu Trilogy for a jarring drama, set during the Bengali Famine of 1943. In An Enemy of the People, Ray’s reworking of the Ibsen drama, a beleaguered doctor claims that a temple’s holy water is causing epidemics.

In The Branches of a Tree, grown sons rush to the side of a dying family patriarch, and the reunion is filled with emotional pain and disillusionment.

In the short film Deliverance, the landowner must deal with the consequences when an Untouchable worker dies on the job. Other short films on the same program are Pikoo’s Diary, showing a young boy’s shattering day at home, and The Inner Eye, Ray’s exquisite portrait of painter Binode Bihari Mukherjee.

Other series’ offerings are The Home and the World (adapted from Rabindranath Tagore, Ray’s mentor), The Elephant God, The Golden Fortress, and The Kingdom of Diamonds. Sikkim, a poetic sketch commissioned by the ruler of a Himalayan state, is screened with Bala, Ray’s record of the famed Bharata Natyam dancer.

Long Shadows: The Late Work of Satyajit Ray is presented in collaboration with Columbia University.

Screenings will be held at the Walter Reade Theater, 165 West 65th Street. Tickets are on sale at the box office and online: http://www.filmlinc.com

Diana Barth writes about film and theater for The Epoch Times and other publications.