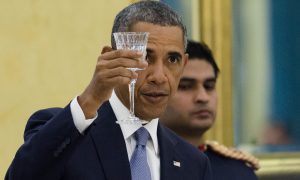 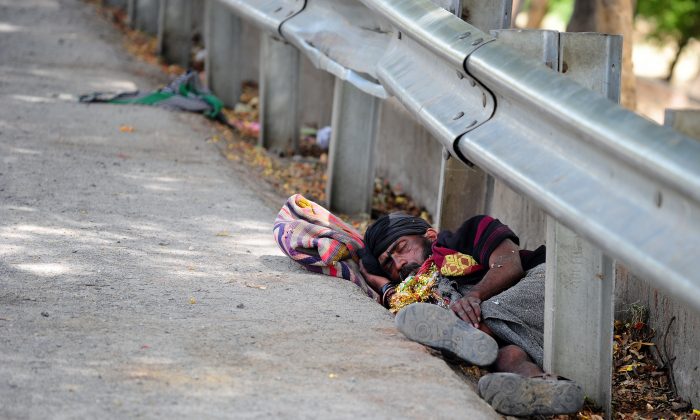 An Indian man rests on the road side during a hot summer day in Allahabad on May 22, 2015. (Sanjay Kanojia/AFP/Getty Images)
Environment

India’s Poor Live and Die on the Streets; No Escape From Deadly Heat Wave

“Cover properly, have light color clothes, take umbrella, take care, be in cool area—had they taken such care, this could have been avoided,” said B.R. Meena, a government official in India, regarding the deaths of some 1,400 people due to the ongoing heat wave in the country.

However, for the 270 million Indians who live on less than $1.25 a day, resting in the middle of the day just isn’t an option. While the Indian middle class has been suffering from frequent power outages that cut air conditioning, the poor have faced the brunt of the heat wave.

The heat wave sweeping across India has resulted in temperatures in some parts soaring to 117 degrees Fahrenheit, with even tarred roads melting in the extreme weather.

Around 23 million Indians live on the streets, lacking adequate resources and shelter. Millions of other low-income Indians, including farmers, wage laborers, and street vendors, simply can’t afford not to work to feed their families.

Around 23 million Indians live on the streets, lacking adequate resources and shelter.

Heat waves are common in India, and occur during the hot season between March and June when high-pressure areas develop over the subcontinent. However, these extreme weather events are becoming increasingly deadlier and more frequent. With an expanding middle class, India’s air-conditioner usage is increasing rapidly, simultaneously placing a large burden on the country’s already overburdened electricity grid.

In the states of Andhra Pradesh and Telanga, the worst affected areas, the death toll is nearly double what it was during a shorter hot spell last year.

Respite from the heat is expected from the southwest monsoon, which is predicted to hit the subcontinent by June. India, with its over 600 million people dependent on agriculture, needs a timely monsoon to ensure a bountiful harvest. Last year, India had a late monsoon, which was also its worst in five years, with 12 percent less rainfall than average.

The Indian Meteorological Department has predicted that the monsoon would arrive on time this year. However, the National Oceanic and Atmospheric Association issued an advisory this week, warning of a strong El Niño that will last through the year.

The atmospheric phenomenon created by the weakening of the easterly trade winds over the equatorial Pacific warms up the ocean, bringing more rain to the west coast of the United States, but dissipating in storms over the Indian Ocean. This could result in a later, weaker monsoon in the Indian subcontinent.

Indians wait for the arrival of the vital monsoon season every year, but this year, the country will await the rains with bated breath, hoping for relief from the deadly heat.