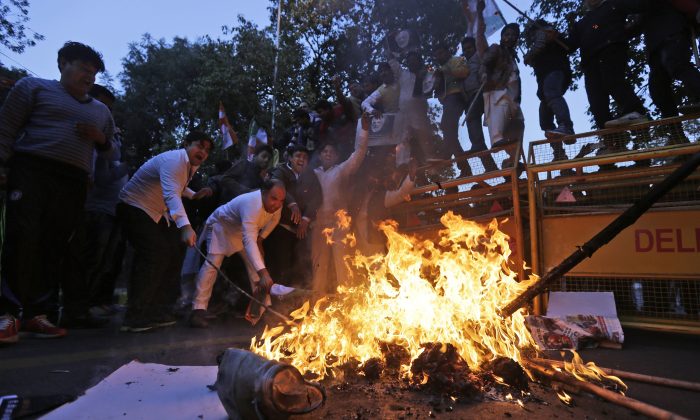 Members of the Indian Youth Congress burn an effigy of Indian Prime Minister Narendra Modi to protest against his visit to Pakistan in New Delhi, India, Friday, Dec. 25, 2015. Modi arrived in Pakistan on Friday, his first visit as prime minister to the Islamic nation that has been India's long-standing arch rival in the region. (AP Photo/Altaf Qadri)
Middle East

India’s Modi Arrives in Pakistan on First Visit as Premier

ISLAMABAD— India’s Narendra Modi made a surprise visit to Pakistan on Friday, his first such trip as prime minister to this Islamic nation that has been India’s long-standing archrival in the region.

The previously unannounced visit is a potential sign of thawing relations between the two nuclear-armed neighbors. The two heads of government also had an unscheduled meeting at the Paris climate change talks earlier this month.

Since gaining independence from Britain in 1947, India and Pakistan have fought three wars, two of them over Kashmir, the Himalayan region that both countries claim.

Modi landed on Friday afternoon in the eastern city of Lahore and met with his Pakistani counterpart Nawaz Sharif, state-run media reported. The visit coincides with Sharif’s birthday and the wedding of his granddaughter.

Security was beefed up at the Lahore International Airport shortly before Modi’s arrival.

After spending about two hours with Modi at his residence, Sharif went to the Lahore airport along with Modi to see him off.

Sharif and Modi held a meeting in a “cordial and positive atmosphere” and they agreed to continue working for the welfare of people of their countries, Foreign Secretary Aizaz Ahmad Chaudhry told reporters.

He said Modi called Sharif at about 11:30 a.m. on Friday and expressed his wish to visit Pakistan

“This is how this visit was suddenly planned,” he said. Chaudhry termed Modi’s visit a “gesture of good will” and hoped that it will help resolve all of their outstanding issues when the two sides resume talks in the near future.

John Kirby, spokesman for the U.S. State Department, said the visit was a welcome one.

“As we have long said, better relations between neighbors India and Pakistan will benefit the people of the entire region,” he said.

Earlier in the day, Pakistani Foreign Ministry spokesman Qazi Khalilullah said India had informed Pakistan about the visit on Friday. He refused to share any further details.

One of the first public signs of the visit came Friday morning when Modi, during a stop in the Afghan capital of Kabul, tweeted that he is “looking forward to meeting” Sharif in Lahore, “where I will drop by on my way back to Delhi.” He said he also called Sharif and wished him happy birthday.

Sharif’s sprawling residence had been colorfully decorated for his granddaughter’s wedding reception when Modi arrived along with the Pakistani prime minister. The two leaders were later shown sitting together in a room looking happy and relaxed.

Analysts viewed the visit as a potential turning point in Pakistani-Indian relations.

“I think it is going to play a significant role in improving ties between the two South Asian archrivals,” said Amanullah Memon, a professor of international relations at Preston University in the Pakistani capital, Islamabad.

“Any step toward trying to stabilize and provide a new beginning to India-Pakistan ties is welcome and needs to be supported by all those who believe that India and Pakistan have a common destiny and it is in their interest to fight together their common problems, including terrorism and economic under-development,” he said.

Tarun Vijay, a spokesman for Modi’s Bharatiya Janata party, praised Modi’s visit as a sign of statesmanship. “This is the best Christmas gift to the mankind which believes in peace and amity. He has risen to the commanding heights of being a statesman who can take a bold step surprising his friends and foes but melting ice in the relations,” Vijay said

However Modi faced criticism from the main Indian opposition Congress Party as well.

“Heads of state don’t drop in to give Christmas or birthday greetings, particularly when you have such a history of complex issues between the two countries. It should have been a proper structured state visit. We would have welcomed it,” Anand Sharma, a Congress Party spokesman said.

Members of the Indian Youth Congress in New Delhi also staged a protest against the visit, during which they burned an effigy of Modi.

After a year of rising tensions, top security officials from India and Pakistan held talks in Thailand’s capital earlier in December, discussing a range of issues, including Kashmir and ways to maintain peace along the countries’ shared border. Also, two weeks ago, Indian External Affairs Minister Sushma Swaraj visited Pakistan to attend a meeting on Afghanistan.

India accuses Pakistan of arming and training insurgents fighting for Kashmir’s independence from India or its merger with Pakistan, a charge Islamabad denies. More than 68,000 people have been killed in ongoing Kashmir violence, which began in 1989.

A cease-fire along the so-called “line of control” that serves as the border between Indian and Pakistani-held Kashmir has largely held since 2003, but cross-border firing and minor skirmishes are fairly common, with each side routinely blaming the other.

Mirwaiz Umar Farooq, a key separatist leader in the Indian portion of Kashmir, said: “It’s a welcome step. We hope that it is followed by a consistent policy of engagement to resolve the Kashmir dispute. India and Pakistan have to evolve a mechanism to involve the core party to the issue — that is the Kashmiri people.”

India also wants Pakistan to bring to justice Hafiz Muhammad Saeed, the alleged mastermind of the 2008 Mumbai terror attacks that killed 168 people. Saeed lives openly in Pakistan and often appears on TV interviews; the government claims it lacks the evidence to charge him.