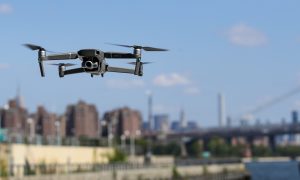 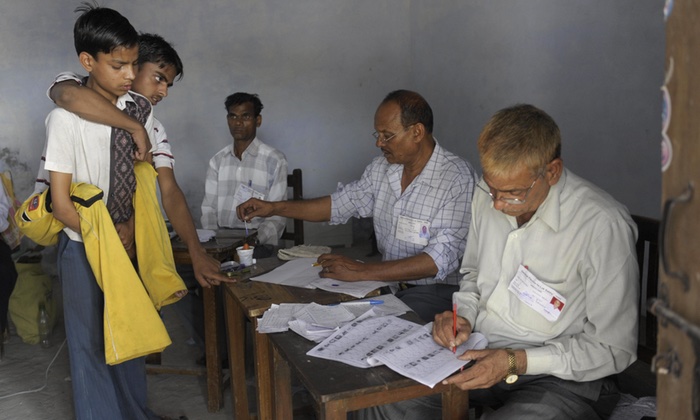 An Indian polling station official applies ink to the finger of a disabled Indian voter as he is carried into a polling booth in Ghaziabad on May 7, 2009. (Manpreet Romana/AFP/Getty Images)
World

Sudharani, a 48-year-old visually impaired mother of two, has never voted in secrecy in India. She has always required an escort to help her exercise her choice.

The right to vote in secrecy is an electoral right, defined by India’s Representation of the People Act, but in Sudharani’s case it never worked because there was no braille on the voting machines.

Sudharani is a physiotherapist and a disability rights activist with an NGO called SAMA Foundation. She worries if her votes were rigged. She says she has no way to know the truth.

“I feel somewhat guilty because I’m visually challenged! Why am I not able to vote all by myself?” said Sudharani of her recent electoral experience in the southern state of Karnataka.

Sudharani is just one of 27 million disabled people in India, a country where the total number of voters is about 2.5 times that of United State’s population (834 million).

In advance of the 2019 national elections, India has committed to making its elections accessible so that it can keep its constitutional promise to voters with disabilities.

Democracy is about open, broad consultation with all stakeholders, and India has much at stake considering it hasn’t paid much attention to its disabled population until recently, having only begun to track disabilities in its 2011 census.

Most Disabled Voters in the World

India’s elections are the biggest democratic, electoral events in the world. Getting it right requires massive preparation and coordination between its various democratic institutions at the grassroots, state, and national levels.

Compare this with the 2016 national elections in the United States. There were 867 polling places for over 235 million eligible voters, and 16 million people with disabilities voted, while 65 percent of the polling stations had an accessible voting system, according to the American Association of People with Disabilities.

India’s official statistics of 27 million disabled people lacks credibility according to ElectionAccess, a global NGO. It cites massive under-reporting, and calculates the actual numbers to be more like 60 million to 80 million.

The Election Commission of India recently took a few significant steps to make its elections accessible. These include community level initiatives and meetings, and consultations at the national and state levels to draft a countrywide policy on the matter.

The two NGOs produced a book of 15 community songs and 20 street play scripts that includes messages to encourage people with disabilities to vote, according to J. Satish, the project coordinator of CRT’s Right to Education Task Force.

Karnataka is one of two states where the commission introduced these resources. India has 29 states, and it has a mammoth task ahead of its 2019 vote.

The Election Commission of India declared “Accessible Elections” the theme of its 2018 National Voters Day (January 25).

“The very foundation of a democracy lies in the representation of all stakeholders, and an indispensable part of nation-building starts with the inclusion of all in its electoral process,” the commission said in a release.

The commission also announced that it would introduce braille features on electoral photo identity cards and distribute them to all visually challenged people, so next time, Sudharani will get to vote on her own.

According to the Times of India, the commission has also offered to look into alternative voting methods for people with disabilities, like advance voting or early voting, voting from home, postal voting, transport assistance, and mobile polling stations.