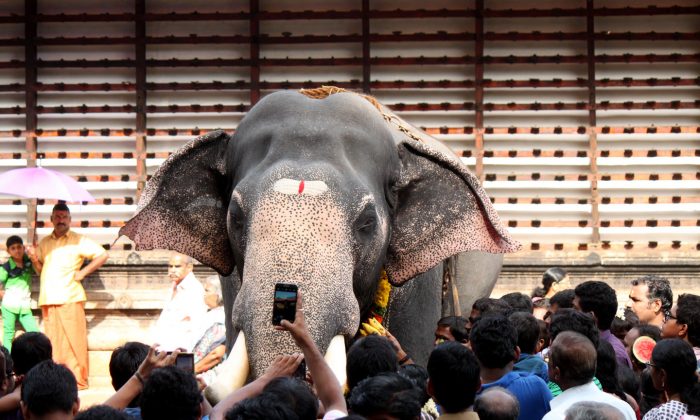 Smudged with paint and garlanded with leis for the elephant feeding festival in Thrissur, Kerala State, India, on July 17, 2014, these elephants’ heavy chains and thick ropes reveal their dual life—one of stardom and one of servitude. (Venus Upadhayaya/Epoch Times)
Animals

THRISSUR, India—Outside the central temple of Thrissur, a town in the southern coastal state of Kerala, thousands gathered to feed some 60-70 elephants on July 17. They were there to celebrate the elephant feeding festival called Anayoottu, which takes place every year on the first day of the Karkidakam, the last month in the local calendar.

Though cautious, many excitedly tried to feed bananas to the elephants through a bamboo barricade. Others took pictures on cameras and cellphones from a safe distance. The caretakers were more daring, feeding the elephants balls made out of rice and ayurvedic herbs straight from their hands.

As the festival finished and the elephants made their way out, people start hooting and shrieking.

“They are hooting at the most famous elephant, Ramachandran. He’s the tallest of all,” said T.V. Vipin, a young official at the temple.

Ramachandran’s full name is Thechikottukavu Ramachandran, the first name coming from the temple he belongs to. According to Elephant-Kerala.com he is the second largest elephant in the state at 10.3 feet. He is so well known, he has his own Wikipedia page, his own Facebook page, and a Google search of his name reveals over 21 thousand results.

Despite the elephants’ stardom, life for these elephants is anything but comfortable.
They are in high demand for festivals, film shootings and even political parades, making their lives busy and stressful.

The stress has started to take its toll on the elephants, who increasingly suffer from disease and stress induced rage. Last year, Ramachandran was arrested after he ran amok in a temple, killing three women and injuring twenty people. He was later released on bail for $50,016 (30 lakhs). According to The Hindu, Ramachandran has killed seven people and two elephants since 1979, and was banned from public festivals for two years after he killed a woman in 2011.

“These days, because of being in high demand, elephants travel on trucks overnight and can’t sleep while traveling. They hardly get 15 liters [3.9 gallons] of water and they don’t get to walk,” said Madambu Kunjukuttan, who has studied a traditional treatise on elephants in Sanskrit called “Matangashastra”. Kunjukuttan says that according to Matangashastra, an elephant’s health depends on good sleep, exercise, and around 53 gallons of water a day.

These privately owned elephants also suffer abuse from their caretakers. Looking at Ramachandran, his left eye looks as if it never had an eyeball; it was in fact lost when his caretaker beat him.

Most of the 700 or so domesticated elephants in Kerala are privately owned and rented out for profit.

According to Kunjukuttan, it costs $7,502 (4.5 lakhs) to hire Ramachandran for a day, and most of the year his calendar is full.

“There are around 100 poorams [mass religious festivals with elephant performances] during the year and he’s the leading elephant in all [of them],” he said. “It costs just 1,000 rupees ($16) a day to maintain an elephant. Imagine the profits the owners make.”

While the government of Kerala has issued guidelines for the treatment of elephants in public activities, the rules are rarely enforced.

After the Anayoottu festivities, four caretakers could be seen dragging a young elephant, which had dug its heels into the ground, toward the trucks. The other elephants had already been led out to high, open-air trucks that would take them to their next destination.