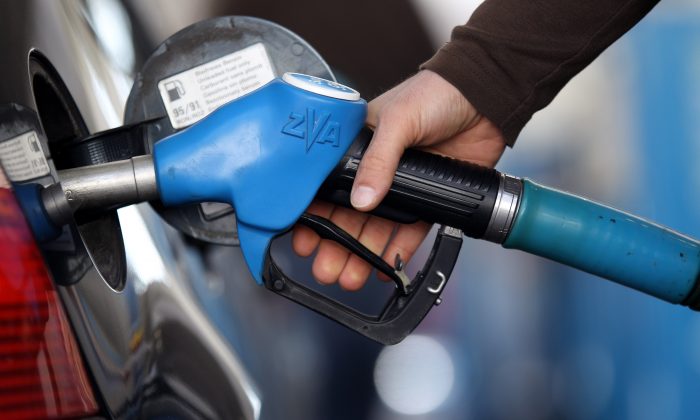 A man pump gas in a file photo. (Photo Illustration by Miguel Villagran/Getty Images)
US News

Indianapolis Man Fills up Gas Tank, Only to Find Water

An Indianapolis man who bought $40 of gas at a gas station was left with a bill of more than $500 after he found the fuel was contaminated with water.

Steve Schwartz usually fills up his tank, and one day he noticed he was almost out of gas.

So he pulled into the Citgo on the 3900 block of S. Meridian Street.

A fill-up there cost about $40 for 16 gallons. Schwartz pulled out, but only got about a mile down the road. All the lights on the dashboard went on and the car started to shudder, prompting him to take the 2005 Lexus to a mechanic.

A gasoline sample revealed “mostly water” inside the gas tank.

“I went to the owner several times and admitted there was a gas contamination problem and he told me would make an insurance claim and have them contact me the following day,” Schwartz said.

However, no call has come as of yet, so Schwartz wanted to warn others.

$40 fill-up at gas station turned out to cost driver over $500 after fuel was contaminated with water: https://t.co/3QUauhtwbv

People who experience similar issues are encouraged to report to the state Division of Weights, Measures, and Metrology.

“The Weights, Measures and Metrology Program seeks to insure that consumers receive full measure when they purchase a product sold by weight, measure, or count, and that any statements on packaging which declares a weight or measure are accurate. Accurate weights and measures are the basis for any quality control process used in industry,” the agency’s website stated.

According to Bell Performance, symptoms of water in the gas tank includes a sudden change in the performance of the vehicle.

“You try to accelerate and the car hesitates or sputters consistently. You try to get up to highway speeds and the car just doesn’t want to cooperate. Or maybe the vehicle sputters and then revs and jolts to higher speeds when it shouldn’t,” the company stated.

If a person has this experience and has just filled up at the pump, it’s a good indicator of water in the gas tank.

“The sputtering and hesitation comes from water slugs being sucked up to the injectors. Water doesn’t in the engine environment. For one thing, when water is injected into the combustion chamber, it turns to steam like you’d expect. But steam doesn’t compress or expand in the same way that ignited petroleum does, so the piston doesn’t have anything to push up again. The sudden revs to high speed exhibited by your engine are probably from when the injector gets a new slug of fuel after spraying water,” Bell Performance explained.

It’s imperative to get the problem fixed quickly, or the water can cause rust in the fuel system and potentially cause other problems as well.