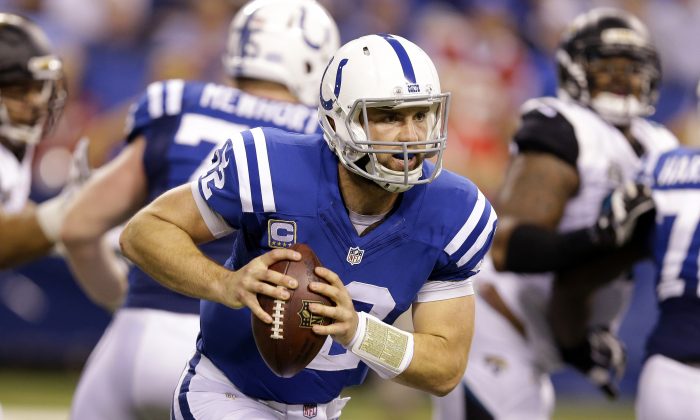 The Indianapolis Colts bested the Jacksonville Jaguars last weekend, and they’ll play the Redskins at home this Sunday. Here’s some of the latest buzz:

Former Baltimore Ravens running back Ray Rice was reinstated by the NFL and can play again after a video emerged of him hitting his wife earlier this season.

Rice won his appeal on Friday, and there was speculation that he could play for the Colts, who are in need of a running back.

There’s been no reports on whether or not Rice could head to the Colts.

But some analysts have made speculation. “The Colts would be the ideal choice for Ray Rice (not that he’ll have a say in which teams approach him, if any),” said CBS reporter Jason La Canfora on Twitter.

“Rice has a strong relationship with Colts coach Chuck Pagano and is well liked by Colts players like Redding and Jones, who he’s played with,” he wrote. “Staying somewhat closer to his home in New Rochelle makes sense, and Colts badly need help at RB, in the screen game and in pass protection.”

La Canfora said that Rice is in great shape and could start playing right away. He notes that if no one picks him up this season, there’s a strong possibility he could be signed in 2015.

He also tweeted: “Colts have a smaller media market and a small market in general. And Colts owner Jim Irsay has had to ask for 2nd chances himself.”

Luck one of ‘the best’

“He’s one of the best I’ve seen in the league,” Haslett said, per The Washington Post.

“He gets the ball out of his hands. Things don’t bother him. He knows where to go with the ball. He’ll take a hit, and it doesn’t really affect him.”

Luck has been a bit spotty this season with his accuracy, but he’s putting up huge numbers nonetheless. Luck has thrown for 3,641 yards and 29 touchdowns in 11 games with a 63.4 percent completion rating.

“The object is not just to hit him or put pressure on him or get a quarterback hit on him,” Haslett added. “Obviously you’ve got to get a sack on him or try to get the ball or dislodge it from him, which is not easy because he’s a big human being.”

TY Hilton gashed the Jaguars for 122 yards and a touchdown last week, but he’s not a lock against the Redskins, who have been better in 2014 on defense than in 2013.

The Redskins defense slowed down the 49ers in a loss last week, limiting the team to 17 points. Washington is also ranked a respectable 10th in passing yards allowed with 253.2 per game. But the Redskins are a bit worse in points, ranked 22nd with 19.7 allowed on average.

This means that it might be a bit of a gamble to start Hilton for one’s fantasy football team.

However, the Redskins have allowed wide receivers to score on them in eight out of 11 games this season.

Reggie Wayne had some choice words this week that he’s not going to be able to play at a high level due to his body breaking down at age 36.

“You ever heard of toilet material?” he said on Friday of the criticism, per IndyStar.com. “That’s the category I put that in.”

“I don’t buy into none of that,” he said. “All I can do is do my job. Run the plays that are called, and keep it moving. Since I’ve been playing at the age of seven, everything hasn’t been peaches and cream. It’s my job to go out there and prove people wrong and keep going.”

However, some of the criticism might be justified as he turned in only three catches for 10 yards and no scores against the Jaguars last week.

The Colts waived Loucheiz Purifoy, a rookie cornerback, after some disclipinary issues.

He was replaced by Jalil Brown.

“Colts had Purifoy ranked over Marcus Burley at final cuts, so they were quite fond. I can say w certainty this is not a football decision,” said Stephen Holder of the Indianapolis Star.

Holder added that he was waived over “a string of minor, in-house disciplinary issues.”

The Seattle Seahawks claimed Purifoy after he was released, CBS reported.