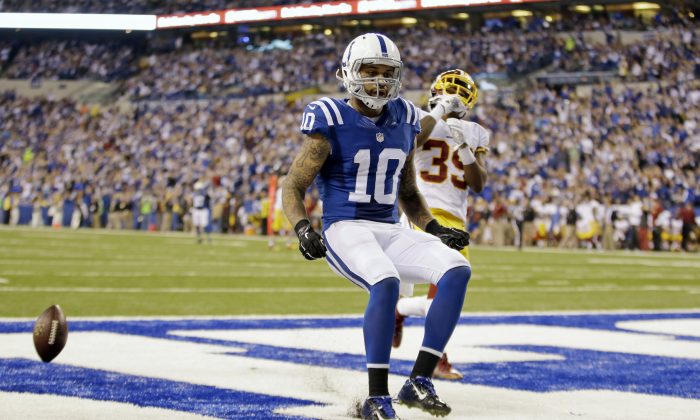 Indianapolis Colts wide receiver Donte Moncrief scores a touchdown on a 48-yard pass from quarterback Andrew Luck in front of Washington Redskins running back Roy Helu during the second half of an NFL football game Sunday, Nov. 30, 2014, in Indianapolis. (AP Photo/AJ Mast)
NFL

The Indianapolis Colts play the Cleveland Browns on Sunday at 1 p.m. ET. Here’s some of the latest buzz on the team:

Colts running back Trent Richardson, who was traded by the Cleveland Browns to the Colts last year, said that he’s looking forward to playing his old team.

He said if he scores a touchdown, he’ll jump into the Dawg Pound fan section at FirstEnergy Stadium on Sunday.

“I get in the end zone, get a touchdown, I’m going to jump in the Dawg Pound. I know I have some true fans out there, and I know they still love me,” he said, via ESPN. “I don’t want to say it’s a revenge game, but it’s going to be a lot of emotion put in this game,” he said.

The Richardson trade entailed the Colts giving up a first-round draft pick.

However, Richardson hasn’t lived up to the expectations and has been struggling. The Colts relegated him to a backup role, as he is averaging only 3.3 yards per carry this season.

“I always took this phrase from mom, uncle and auntie, ‘You have to go through the worst to get to the good. It’s going to be bad until you get to the good,'” Richardson said. “Staying with that, time is due for a great game.”

Andrew Luck is continuing on his path toward being an elite playmaker in the NFL.

This week, he was named the AFC Offensive Player of the Month after he completed 8-of-144 passes for 1,280 yards, and 12 touchdowns. He only had two interceptions.

“Behind a quarterback rating of 112.0, Luck helped the Colts to a 3-1 mark in the month of November,” says Colts.com.

Meanwhile, Luck is already nearing the 1,000-completion mark in his young career. He needs just five completions to hit the mark.

“While 152 different quarterbacks have already reached the milestone, Luck stands out for the speed at which he will get there, with Sunday’s game marking his 45th regular-season appearance in the NFL,” notes BleacherReport.

Vontae out vs Browns

He suffered a concussion last week against the Redskins, the Colts’ website said.

Indianapolis will now have to use Darius Butler and Greg Toler as their cornerbacks.

Coach Pagano said this week that he’s preparing for Johnny Manziel and Brian Hoyer. Last week, the Browns benched Hoyer during the game, allowing Manziel to play for the remainder.

However, Browns coach Mike Pettine said this week that Hoyer would start against the Colts.

But Pagano said his team will be prepared for both.

According to Pro Football Talk, “The team will do their ‘due diligence’ on both quarterbacks so that they are prepared to adjust should Manziel wind up in the game again this weekend. It’s a wise move under the circumstances, although there will surely be some uncertainty about how to face Manziel if things play out that way.”