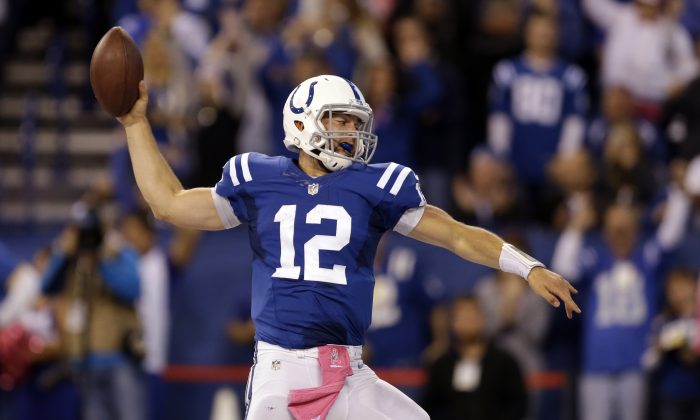 Indianapolis Colts quarterback Andrew Luck celebrates a touchdown against the Baltimore Ravens during the second half of an NFL football game in Indianapolis, Sunday, Oct. 5, 2014. (AP Photo/Jeff Roberson)
NFL

The Indianapolis Colts are slated to play the New England Patriots Sunday night at Lucas Oil Stadium in Indianapolis in what should be a pivotal matchup for both teams.

Here’s some of the latest buzz:

Colts QB Andrew Luck has a “Eurocentric,” according to a recent report about the 25-year-old.

“I enjoy asking the folks working [at the butcher] what they recommend,” he told Sports Illustrated, talking about the duck prosciutto. “And it’s good, maybe a little saltier than other thinly cut meats. I eat it with cheese and crackers.”

Sports Illustrated did a report on what Luck eats as part of their “Fridge Raider” series.

It said he has a variety of stinky cheeses and high-percentage cocoa chocolate.

It’s worth noting that he grew up in Germany when his father worked for NFL Europe.

“I’m a sucker for cheese. I figure it’s a European thing to eat cheese and crackers before a meal—that’s my afternoon snack or I do it before dinner. Or I’ll mix in some cheese with an omelet in the morning if I’m not eating at the facility,” he added.

Receiver TY Hilton has said he knows that New England’s coaching staff will specifically focus on him for the game this week.

“You know Belichick always has that scheme,” Hilton told the Indianapolis Star.

It’s likely that All-Pro cornerback Darrelle Revis will focus on Hilton. In the 2013 AFC divisional playoff game, Aqib Talib tried to stop him but Hilton caught four passes for 103 yards.

Meanwhile, Luck adds: “You’ve got to expect something unexpected.”

And Chuck Pagano noted, “It’s a game plan defense, if you will.”

“Just watching them against Denver, they do a great job of mixing things up. They’re not going to give you the same thing over and over again. … Right when you think you’ve got the four guys identified as the four rushers, they bring different people and do a great job of hiding their fronts and coverages.”

Linebacker Erik Walden and DE Arthur Jones both returned to the Colts’ practice Thursday after missing one earlier in the week, via the Colts website.

Walden said, “I ain’t missing this one. They don’t pay to me to watch, do they? They pay me to play,” according to the Indianapolis Star.

Jones, however, is questionable to play the Patriots.

RB Ahmad Bradshaw said that the recent bye week for the Colts is important.

“We’re taking it upon ourselves to get 30 minutes extra a day,” he said.

Bradshaw was the leading rusher for the Giants in their two Super Bowl victories against the Patriots.

Dwayne Allen, the Colts’ tight end, received the Ed Block Courage Award this week. He was named as such by his teammates.

“This guy is a selfless guy,” Chuck Pagano said of Allen, via the Colts website. “He’s a great player, but he’s a better person. I know he spends a great deal of time giving back and serving. We talk all the time here about team first and self second and serving.

“He does it on the football field and he does it in the locker room. He’s not a real loud guy around here. He lets his actions speak for themselves. He’s one of those guys that whatever time he has away from football, you know he’s doing something for the community and spending time out in community and giving back.”

He’s one of those guys that has a great appreciation for the blessings that he has. He certainly understands that this is a privilege, and not a right, and he’s taken full advantage of the platform he has to give back, to serve our community, serve the team and serve the horseshoe. He’s a horseshoe guy through and through. He’s a great, great person.”