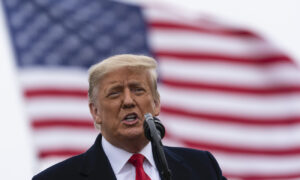 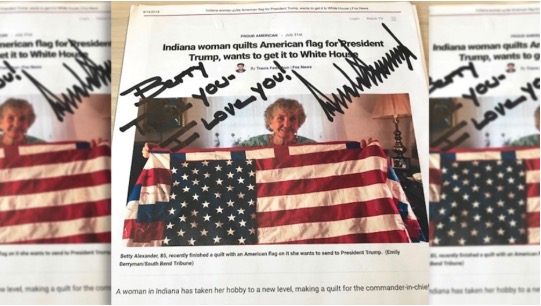 A handwritten note from President Trump to 85-year-old Indiana woman Betty Alexander about the American flag quilt she made for him. (Sen. Todd Young's Office)
US News

An 85-year-old Indiana woman who made a quilt for President Donald Trump said she “never gave up hope” that her gift would reach the White House, Fox News reported.

And recently Betty Alexander, of South Bend, received thank-you notes from the President and his daughter Ivanka Trump.

“I just held it and cried. I was just shaking all over,” she said, according to Fox News.

“Betty, Thank you—I love you!” reads the inscription, signed by the president.

In a separate note, Ivanka Trump wrote “As promised, I hand delivered your beautiful quilt and letter to the President. Thank you for your prayers and warm words of encouragement.”

Republican Sen. Todd Young of Indiana shared photographs of the thank you notes on Oct. 3 via Twitter.

Great news from Betty Alexander in South Bend! Betty received thank you notes from both @POTUS and @IvankaTrump for her handmade quilt. I’m so glad I was able to help deliver it to the @WhiteHouse. pic.twitter.com/WeAutTSBqv

The normally busy octogenerian—who said she goes to the gym three times a week—told the South Bend Tribune that she began working on the quilt when she found herself indisposed after falling and breaking her hip.

“I just watched my mother do it,” the woman told the Tribune.

She said the idea to gift her handiwork to Trump came to her in a flash of inspiration.

“When I was thinking ‘Who’s this quilt going to be for,’ the Holy Spirit just told me it should be for President Trump,” Alexander told the paper.

She said Trump’s respect for the American flag was what gave her the idea for the quilt’s pattern.

“I knew he loved the flag, and I thought I could make a flag quilt,” she told Fox News. “I didn’t have no idea how to start it, or what to do, but I just prayed about it.”

So she sewed a queen-sized quilt, with a large American flag in the center, surrounded by decorative elements in red, white, and blue. She posed for a photograph for the Tribune, proudly holding the handmade quilt.

“I just want to make sure he sees it,” said Alexander, and explained “But he won’t use it for his bed. It’s just for show.”

The article in the Tribune caught the attention of Republican Sen. Todd Young of Indiana, whose office got in touch with the woman.

“Betty was just an absolute sweetheart,” Young told Fox News on Oct. 3. “It was clear that she invested a lot of time in this. She took great pride in not just her craft, but also helping others.”

Young arranged for the quilt to be delivered to the White House.

“I think most of us appreciate that spreading some joy right now is a good thing for the country,” Young told Fox News.

“I’m so glad I was able to help deliver it to the White House,” the senator tweeted.

Alexander said she likes to do kind things for people.

“I’ve had love in my heart to make people happy and do good,” she told Fox News. “I’ve always loved people.”

Watch the video below: 7-year-old Malea Emma stealing the show singing the National Anthem at a Major League Soccer match.