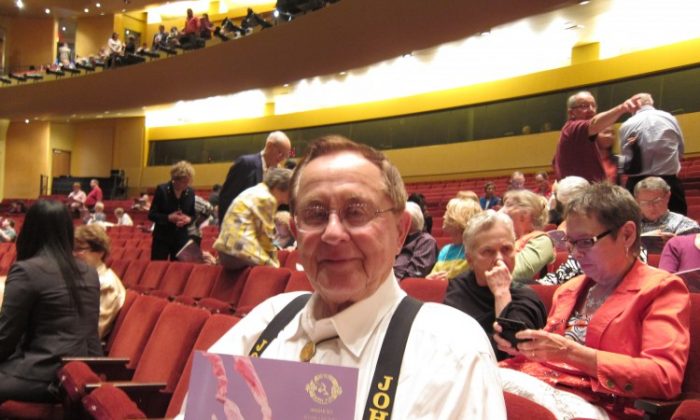 LOUISVILLE, Ky.—Eighty-five-year-old Edgar Kuhlenschmidt traveled with his wife, Audrey, and their friend Judy Norrington from Evansville, Indiana to see Shen Yun Performing Arts in Louisville on May 1—a two hour and 20 minute trip. “I thought it was great,” Mr. Kuhlenschmidt said.

The Kuhlenschmidts had traveled to Japan and China several times over Mr. Kuhlenschmidt’s career. He has owned several franchises, including a Toyoto dealership. He currently is president and main stockholder of Vincennes Tractor, Inc.

As soon as Mrs. Kuhlenschmidt saw an ad, she knew she wanted to see the performance.

“It was wonderful,” she said.

“I was glad that I ordered the tickets and came,” said, Ms. Norrington, a retired vice president of a printing company in Evansville.

She enjoyed the “beautiful costumes, and the way the ladies and the gentleman carry themselves when they are dancing. It’s wonderful, beautiful.”

She was also impressed with the digitally animated projections that “creates vividly animated settings, extending the stage and transporting the audience to a world where heaven and earth are one,” according to the company’s website.

Mr. Kuhlenschmidt was impressed with the hard work involved to achieve the perfection of the performance. “It’s just great to watch them—the perfection,” he said.

“Very, Very, Ms. Norrington agreed. “You can see that in the dancing. It’s wonderful. It really is.”

The ladies chatted about who in Evansville would appreciate the performance.

“With the museum, you could get the word out there,” Ms. Norrington suggested.

“Oh, it’s absolutely wonderful, I know several people that I am going to tell about it,” Mrs. Kuhlenschmidt said.

“Well, we will spread the word,” Ms. Norrington said.

They hoped the performance would be back, “because we have a lot of people there that …” Ms. Norrington said.

“Would really gravitate to something like this,” Mrs. Kuhlenschmidt finished her thought.