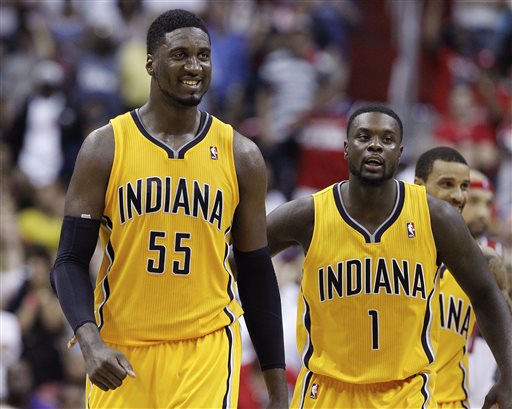 Indiana Pacers center Roy Hibbert (55) smiles as he walks across the court with Indiana Pacers guard Lance Stephenson (1) in the closing minutes of the second half of Game 4 of an Eastern Conference semifinal NBA basketball playoff game in Washington, Sunday, May 11, 2014. The Pacers won 95-92. (AP Photo/Alex Brandon)
NBA

The Washington Wizards will try to stave off elimination against the Indiana Pacers in game 5 of their second round NBA playoff series on May 13.

The Wizards lost two straight at home to go down 1-3 in the series.

The Pacers are back on their homecourt at Bankers Life Fieldhouse, where tip-off is scheduled for 7 p.m. EDT.

Live streaming will also be available via TNT.

If game 6 is necessary, it will be on Thursday at 8 p.m. at the Verizon Center in Washington, D.C.

If game 7 is necessary, it would be on Sunday at a time yet to be determined in Indiana.

See a game 5 preview from the Associated Press below.

Pacers try to finish off Wizards in Game 5

INDIANAPOLIS—Suddenly, Indiana has regained its swagger.

Roy Hibbert is smiling and confident. Paul George is posting double-doubles and confounding Washington’s guards. The defense is contesting shots and forcing theWizards into mistakes, and even when things don’t go right, the Pacers still find ways to win.

They haven’t played like this in months, but the timing couldn’t be better. Win Tuesday against Washington and the rejuvenated Pacers will make a second straight trip to the Eastern Conference finals.

“It has been a while,” coach Frank Vogel said of his team’s surge. “We’ve had a lot of guys, and it’s been well documented, down the stretch they’ve had individual struggles that have impacted the team, the team was in a little bit of a rut.”

Less than two weeks ago, Indiana’s second-half struggles seemed to be headed toward a full-on collapse. As a No. 1 seed, the Pacers trailed the eighth-seeded Atlanta 3-2 in the first-round.

When the Pacers won those last two games to get the past Atlanta, there was no respite. Indiana gave away home-court advantage with an inexplicably poor Game 1 loss. There was speculation about Vogel’s job security, talk of the necessity of benching Hibbert and perhaps trading the All-Star center in the offseason, and why Larry Bird’s midseason moves messed up the team chemistry.

Indiana has responded over the past week by playing its best basketball in at least two months.

The Pacers have won six of eight, three straight in this series, three straight on the road and with a 3-1 lead in this best-of-seven series find themselves right where everyone expected at the start of the season on the verge of reaching the conference finals.

That’s not going to be easy.

On Sunday night, the Wizards blew a 19-point second-half lead, missed their final eight shots and wound up losing by three. The Wizards best player, John Wall, is shooting 31.4 percent from the field and is 1 of 11 on 3-pointers in this series. He’s had 12 turnovers in the last two losses, too.

“He’s just got to keep on fighting through it and the main thing is keeping his confidence and staying aggressive in what he’s doing out on the floor. That’s who he is,” Wittman said. “You can’t all of a sudden become someone else.”

After starting the series with a zero-point, zero-rebound game, he’s rebounded with 19.7 points, 7.7 rebounds and 2.3 blocks in the last three games, which has made a huge difference.

Teammates are getting better looks because of Hibbert’s post presence on offense, and the rim protecting Hibbert has helped the Pacers defense limit Washington to a 79-point average over the last three games. He knows the Pacers can’t afford to stop now.

“We can’t relax. I don’t know what the statistics are, but we don’t want to be one of those (teams that blows a 3-1 lead),” he said. “So we’ve got to go out there and play our best game back home. They’re going to give it their all again and hopefully we’ll be ready.”

Indiana’s biggest question might be fatigue. Four of their five starters played at least 39 minutes in Game 4 including George, who logged 46 minutes.

That’s one reason Vogel gave his players Monday off — even with a potentially deciding game looming Tuesday. But after all they’ve been through, Vogel figures his players have earned it.

“It’s been in the back of my mind, but these guys have played in the high 30’s and in the 40’s before,” Vogel said. “I think they’ll be OK. I think if our guys were all playing 28 or 30 minutes we could probably work in some more practice.”