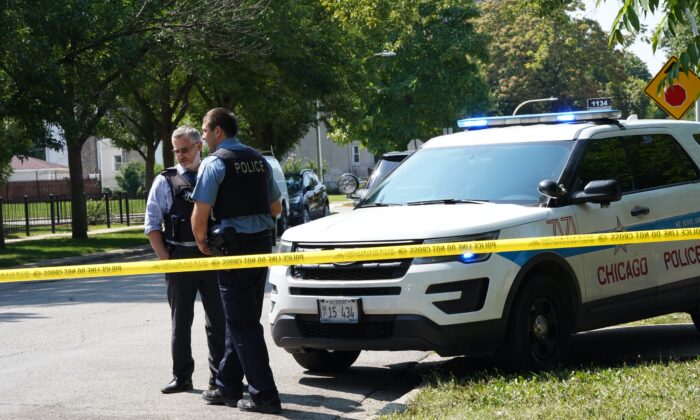 A Chicago police officer talks with a detective at 3443 W. Monroe Street where three people were shot half an hour earlier on Aug. 20, 2021. (Cara Ding/The Epoch Times)
Regional News

“Those who dedicated their lives to serving and protecting our nation’s citizens deserve the utmost respect,” Braun posted on Twitter on Oct. 22. “Come work in Indiana!”

Those who dedicated their lives to serving and protecting our nation’s citizens deserve the utmost respect.

“My office has already heard from many Chicago police interested in serving Hoosiers,” Braun said in another post.

Meanwhile, Munster, Indiana, Police Chief Steve Scheckel, echoed Braun’s sentiment during an interview with Fox News, saying that there’s a “brighter future right over the border” for officers who are under scrutiny for their views on vaccine mandates, and noting that his department has already hired one individual from Chicago.

The warm Hoosier welcome comes as Chicago’s police union and the city continue to clash over COVID-19 vaccine requirements. Officers were required to upload their vaccination status by Oct. 15; those who didn’t comply were placed on unpaid leave.

Chicago Fraternal Order of Police President John Catanzara has encouraged officers not to comply with the mandates. Catanzara rallied officers and other city workers outside City Hall on Oct. 25 to oppose Mayor Lori Lightfoot’s vaccine mandate for city workers.

“This vaccine policy is about ensuring a safe workplace, but fundamentally, it’s about saving lives,” Lightfoot, a Democrat, said in a statement ahead of the vaccine mandate deadline.

“By getting vaccinated, we can preserve the safety of City employees and the health of our communities while moving Chicago closer to a safe return to normalcy.”

On Oct. 18, the mayor’s office issued a statement regarding the city’s vaccine mandate deadline. The release noted that 79 percent of city employees had confirmed vaccination status. Among those who reported, 84 percent were fully vaccinated.

A testing option remains available through the end of the year. After that time, all workers must be fully vaccinated unless the individual has received a medical or religious exemption. While the statement noted that more than 4,000 requests for exemptions had been received, no number was given regarding the number of approved exemptions.

Those who have so far refused to comply have been placed in a non-disciplinary, no-pay status until they are in compliance with the policy.