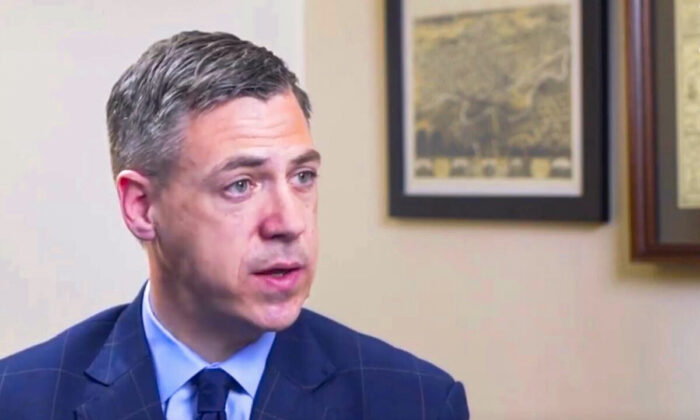 The bipartisan Indiana Election Commission has unanimously dismissed a Democratic challenger’s bid to force an outspoken pro-Trump Republican congressman off the 2022 ballot for contesting the 2020 presidential election results.

Aaron “A.J.” Calkins of Fort Wayne, Indiana, who’s running in a three-way Democratic Party primary for the right to face third-term U.S. Rep. Jim Banks (R-Ind.) in the November general election, filed a formal challenge on Feb. 10. Calkins claimed in the filing that Banks was guilty of a “violation of the 14th Amendment supporting an insurrection.”

Section 3 of the 14th Amendment to the U.S. Constitution states: “No person shall be a … Representative in Congress … who, having previously taken an oath, as a member of Congress … to support the Constitution of the United States, shall have engaged in insurrection or rebellion against the same.”

This so-called disqualification clause that’s part of the 14th Amendment is a post-Civil War measure that, among other things, was aimed at keeping individuals who fought for the defeated Confederacy out of Congress. The amendment was ratified on July 9, 1868, a little more than three years after Confederate Gen. Robert E. Lee’s Army of Northern Virginia surrendered.

The clause was “meant for Confederate officers who actually took up arms against the United States,” J. Christian Adams, president of the Indianapolis-based Public Interest Legal Foundation, recently told The Epoch Times.

The novel theory that someone can be tossed from the ballot for something that falls short of an actual insurrection comes from attorney Marc Elias, who has a long history of successfully challenging election integrity laws in court. He laid out a blueprint for using the 14th Amendment to disqualify Republicans in a Dec. 20, 2021, Twitter post.

“My prediction for 2022: Before the midterm election, we will have a serious discussion about whether individual Republican House Members are disqualified by Section 3 of the 14th Amendment from serving in Congress,” he wrote. “We may even see litigation.”

Elias also is a central figure in the “Russiagate” conspiracy. He represented the Democratic National Committee and Hillary Clinton’s campaign in the 2016 presidential election cycle, hiring Fusion GPS in April 2016 to conduct opposition research against then-presidential candidate Donald Trump. That research effort culminated in the now-discredited 35-page dossier written by former British spy Christopher Steele that purported to tie Trump to the Russian government.

At the Feb. 18 commission hearing in Indianapolis, which was live-streamed over YouTube, Calkins said Banks supported an insurrection against the United States by participating in a lawsuit brought by Texas that questioned the election results in several other states and by voting against certifying Democrat Joe Biden as the winner of the electoral votes of Arizona and Pennsylvania during a joint session of Congress Jan. 6 and Jan. 7, 2021. During that joint session, the security of the U.S. Capitol was breached, and the disturbance delayed certification of then-candidate Biden’s election victory by several hours.

During an oral presentation to the commission, Calkins said Banks was part of a larger Republican conspiracy against democracy.

When Banks “co-signed into” the lawsuit, he wanted “to basically disenfranchise 30 million voters from five states,” according to Calkins.

“Representative Banks stated that this was just his personal decision that he didn’t believe the electoral system was correct,” he said.

Calkins appeared to be referring to Texas v. Pennsylvania, the lawsuit Texas attempted to initiate in the U.S. Supreme Court by filing a motion on Dec. 7, 2020, for leave to file a bill of complaint. Banks wasn’t actually a party in the legal proceeding—he was one individual in a bloc of 126 members of the U.S. House of Representatives who filed a motion (pdf) seeking permission to file a sympathetic friend-of-the-court brief in the case. When the Supreme Court decided four days later to not allow the case to proceed, the motion brought by Banks was dismissed as moot.

Calkins also said Banks violated his oath to uphold the Constitution by participating in an insurrection against the federal government. He defined the word “insurrection” to mean “an organized, usually violent act of revolt or rebellion against an established government, governing authority of states, and other political entity.”

“When I saw that happen, I thought this is horrible. This is as bad as burning it down in 1812,” Calkins said, seeming to refer to the burning of the U.S. Capitol building by the British on Aug. 24, 1814, during the War of 1812. “It wasn’t really a coup, but it was an insurrection. There was a violent insurrection by the people who had invaded the Capitol. And then there was a political insurrection, people that were going to try and take it down, just like they did in 1776.

“One set of elections were turned in, and our congressman decided that he had the right to vote against it. I believe that he was part of an insurrection, and because he supported that, I believe that under the clause that he should not be on the ballot.”

Paul Mullin, Banks’s attorney, said the allegation was “baseless.” Mullin said Banks took to television the night of Jan. 6, 2021, to denounce the “tumultuous conduct” of that day and call for its perpetrators to be prosecuted. He said that removing his client from the ballot would deprive his supporters of their preferred representative in the U.S. House.

“This challenge itself is an attempt to undermine democracy,” Mullin said.

Before the commission voted to reject the challenge, its chairman, Paul Okeson, said the events of Jan. 6, 2021, were “a regrettable mark in history,” but he knew of no evidence that Banks was guilty of participating in an insurrection.

After the hearing, Banks claimed vindication.

“Many Democrats in Washington hope to weaponize the 14th Amendment to disenfranchise President Trump’s 74 million voters,” Banks said in a statement. “I hope they watched today’s unanimous decision.”