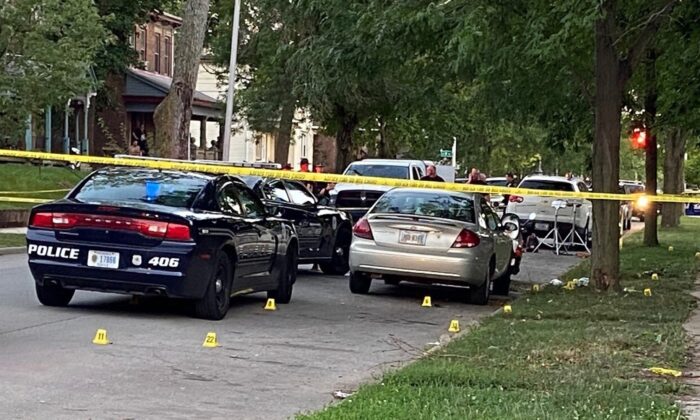 Evidence markers dot the scene on Richmond, Ind., on Aug. 10, 2022, where Richmond Police Department Officer Seara Burton was critically wounded and a man was injured in a shootout following a traffic stop. (Mike Emery/The Palladium-Item via AP)
Crime and Incidents

Richmond Police Department Officer Seara Burton is being treated at a hospital in Dayton, Ohio, following the shooting Wednesday evening.

“Surgery has been performed and she is initially showing slight signs of responsiveness. She has not regained consciousness and is still fighting for her life,” Richmond Police Chief Michael Britt said in a Facebook post Thursday night.

Burton responded to a call about 6:30 p.m. Wednesday from other officers to assist with the stop involving a man who was riding a moped, state police said in a release.

Other officers returned fire and the man was apprehended following a brief foot chase, police said.

Burton, 28, is a four-year veteran of the Richmond department.

The moped rider was treated for gunshot wounds by the officers and taken by ambulance to a hospital, police said. He was arrested and a prosecutor will review the case for likely charges.

The investigation was ongoing by Indiana State Police.