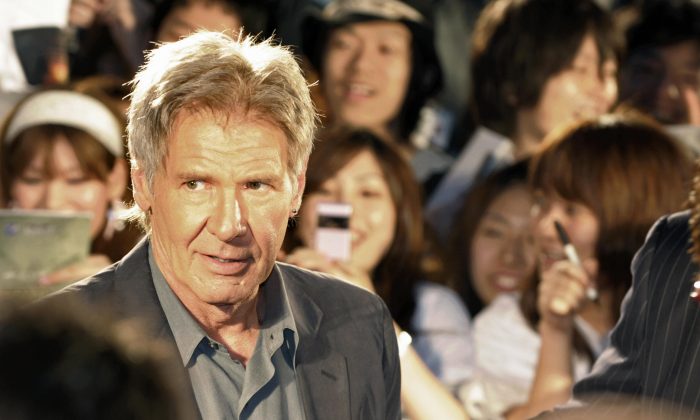 Harrison Ford at the premiere of "Indiana Jones and the Kingdom of the Crystal Skull" in 2008 in Tokyo. (Toshifumi Kitamura/AFP/Getty Images)
Entertainment

Indiana Jones 5 is probably not going to get made for at least two years, if at all.

Following a heavily criticized fourth installment of the series, the fifth installment would possibly focus on Jones and his son and new wife.

Disney bought the marketing and distribution rights to future Indiana Jones movies from Paramount a week before Jones’ remarks.

Horn added that “We don’t have  a story. We need a story.”

Lucasfilm, which was purchased by Disney, would produce any Indiana Jones movies. However, the company is busy with Star Wars Episode VII and spin-offs featuring the likes of Bobba Fett. It is expected to release a Star Wars sequel or spin-off every year, beginning in December 2015.

George Lucas remains on the board of Lucasfilm as a consultant.

“We are proceeding as the folks who own the company, but he’s George Lucas and I’m sure we’ll be in conversations with him” about Indiana Jones movies, Horn said.

However, Lucas and Steven Spielberg have been less definite about how another Indiana Jones movie would happen.

“I will not make another Indiana Jones film unless it’s based on George’s story,” Spielberg told the Hollywood Reporter in January 30. Lucas intends to make that happen but the timetable is unclear (the gap between 3 and 4 was 19 years).

“Kathy and I will figure out some way to work together again,” Spielberg said, referring to Disney’s Kathleen Kennedy, who reports to Horn. “She has a five-year contract.”

Kennedy told Screen Daily on January 28, 2013, that “It takes me out of the mix for a little bit, but not for very long because in addition to Star Wars there’s Indiana Jones and Steven is very much a part of that. So who knows.”

Speilberg added to the Times of India, also in early 2013, that he can imagine doing another one. “I’m excited and impatient to do one but George Lucas just recently retired – I’m hoping that his retirement will not mean he’s retiring the Indiana Jones bull whip and fedora cap,” he said. “I’m hoping that George will stay active in the Indiana Jones world and come up with a story. I let George do the stories. I supervise the screenplays and I direct them but George always comes up with the basic story – and he has not done that yet. But he keeps promising he’s going to, so let’s see.”

Lucas, for his part, said in rare comments on the matter to CNBC in mid-2013: “I’m just a lowly writer. I mean, I won’t even be a writer, I’m just the guy that comes up with the story. And I’ve been working on a story. You know the issue is that now it’s owned by Disney and Paramount, and I don’t know how they’re going to work that out.

Meanwhile, in a video from 2010, Harrison Ford told Access Hollywood that “I’d love to do it.”

“George and Steven [Spielberg] and I have to agree on how to do it,” he added.

Ford added to MTV in early 2013 that “It might be nice, depending on the circumstances, to revisit any one of those characters. What interests me now is the opportunity to work at all and to work in ambitious projects. So I can’t think that way. What I’m looking for is the next opportunity, the next ambitious opportunity. And so it doesn’t matter if it’s one of those. If it is, great. If it’s not, that’s fine too.”