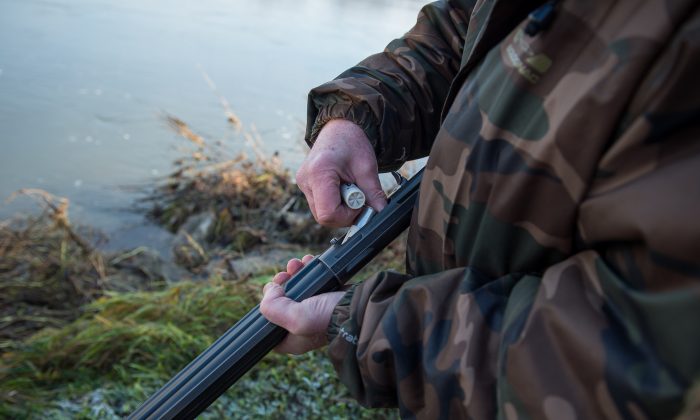 A hunter with a gun in a file photo. (Guillaume Souvant/AFP/Getty Images)
US News

Indiana Hunter Accidentally Shoots Himself in the Leg

An Indiana deer hunter had a close brush with death after accidentally shooting himself over the weekend.

Karl Stratton went deer-hunting in the woods outside Middletown, Indiana on Saturday, Nov. 25. The 50-year-old hunter climbed a ladder to a perch in a tree and hung his 12-gauge shotgun, in its soft case, within reach on a convenient branch.

However, Stratton neglected to follow a few basic gun-safety rules: The gun was loaded, it was pointed in his direction, and the safety was off, Conservation Officer Josiah Julian told IndyStar.com.

Stratton had picked a good perch. At about 5:55 p.m. a deer came strolling by. Stratton reached for his gun—but somehow he discharged it while pulling it out of its case.

The bullet tore into Stratton’s right thigh. He fell out of the tree stand and dropped to the ground.

In a way, Stratton was extremely lucky—he didn’t hit any major arteries and he wasn’t alone. A relative called 911.

Madison County sheriff’s deputies responded to the site off County Road 500 East and found Stratton lying on the ground, bleeding, the Seymour Tribune reported.  They did first aid at the scene and transported the wounded hunter to St. Vincent’s Hospital in Indianapolis, about 50 miles southwest.

Stratton is expected to recover, according to a report from WIBC News.

Such accidents are not as rare as one might hope.

A 53-year-old hunter from Random Lake, Wisconsin was also shot in the leg on Nov. 22, Fox News reported.

The hunter, whose name was not released, was out hunting with four friends near the town of Fredonia, in Ozaukee County, eastern Wisconsin. The party spotted a deer and two fired at it, despite the fact that they were shooting past one of their friends.

Low light is often a factor in accidents like this—but not this time. This happened in the middle of the afternoon.

The wounded hunter was airlifted to Froedtert Hospital in Milwaukee. The Ozaukee County Sheriff’s Office said the shooting appeared to be accidental, MSN reported.

A 17-year-old from St. George, Utah, shot himself in the leg after returning from a deer hunt on Oct. 23, the St. George News reported.

St. George Police Sgt. Tyler Cowan called the incident a “negligent discharge.” The victim told police that his deer rifle “misfired”—which could mean he dropped it, or somehow accidentally hit the trigger.

The teen was transported to Dixie Regional Medical Center for surgery. The injury was not life-threatening.

A Middlefield, Ohio, hunter was charged with two crimes for shooting a pick-up truck he mistook for a deer, the New York Post reported.

Chautauqua County Sheriff’s deputies said Marvin C. Miller, 26, was hunting near the town of North Harmony in southwestern New York state at 11:30 a.m. on Nov. 24. He peered through the trees and brush and spotted a brown object which he somehow thought was a buck.

Miller sent a single round from his high-powered 7-mm hunting rifle right through one front fender of the truck and into the engine. Neither the truck’s driver nor his passenger was injured.

Miller was arraigned in the Sherman, New York, Town Court on charges of discharging a firearm across a public roadway, and second-degree reckless endangerment. Additional charges are pending, according to WGRZ News.

A more serious hunting accident occurred on Nov. 22 when a woman living in that same small southwestern New York town of Sherman was shot and killed by a neighbor while she was walking her dogs behind her home.

Rosemary Billquist, 43, died of a single gunshot wound, just 100 yards from her own living room where her husband sat watching TV.

The neighbor, Thomas B. Jadlowski, thought Billquist was a deer and fired a single fatal shot from his high-powered pistol.

Jadlowski was illegally hunting after sunset and did not have permission to hunt on the property where Billquist was killed.

What do you think about deer-hunting accidents? How do you feel about hunting? Feel free to comment, and if you enjoyed reading this article, please consider sharing it.