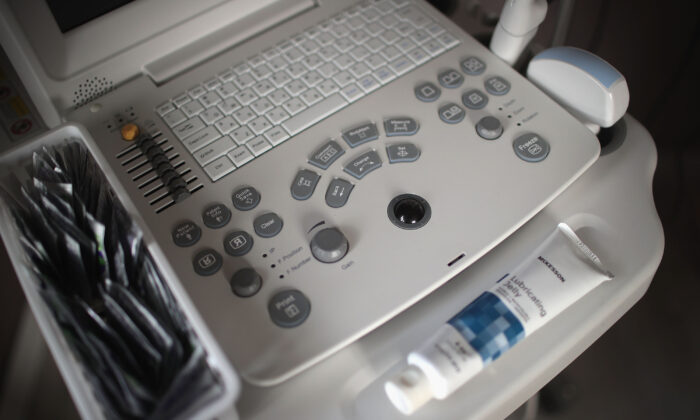 An ultrasound in a clinic in Indiana in a file image. (Scott Olson/Getty Images)
US News

The doctor who performed an abortion on a 10-year-old girl’s fetus and talked about the procedure with the press did not violate privacy laws, her employer said on July 15.

“As part of IU Health’s commitment to patient privacy and compliance with privacy laws, IU Health routinely initiates reviews, including the matters in the news concerning Dr. Caitlin Bernard,” the employer, the Indiana University School of Medicine, told The Epoch Times in a statement.

Spokespersons for the university and a lawyer representing Bernard have not responded to requests for comment.

Bernard told the Indianapolis Star in a story dated July 1 that she had a 10-year-old patient who traveled from Ohio for an abortion.

The Health Insurance Portability and Accountability Act (HIPAA), a federal law, prohibits violating a patient’s privacy. HIPAA protects most health information that can be used to individually identify a patient, such as name, address, and birth date.

Indiana Attorney General Todd Rokita, a Republican, said this week that he was investigating whether Bernard had complied with state law and HIPAA.

Rokita said he had been stymied in his efforts to obtain documents on the situation, and asked for the assistance of Indiana Gov. Eric Holcomb, another Republican.

Shortly after, the Indiana Department of Health released forms to The Epoch Times showing Bernard reported the abortion to the department on July 2, which complied with state law.

While Bernard reported the abortion as required, she listed the age of the father as 17. About two weeks later, police in Ohio arrested a 27-year-old man who authorities say is in the country illegally.

The Indiana Department of Child Services declined to say whether Bernard filed the required forms with it, citing confidentiality laws.

After the report was made public, Rokita said the probe is continuing.

“As we stated, we are gathering evidence from multiple sources and agencies related to these allegations. Our legal review of it remains open,” he told The Epoch Times in an email.

Kathleen DeLaney, a lawyer representing Bernard, told news outlets that the doctor “took every appropriate and proper action in accordance with the law and both her medical and ethical training as a physician.”

She sent a cease-and-desist letter to Rokita on Friday, alleging that his statements have been false and defamatory.

Attempts to reach Bernard have been unsuccessful.

Bernard wrote on Twitter that “Doctors must be able to give people the medical care they need, when and where they need it.”

“It has been a difficult week, but my colleagues and I will continue to provide healthcare ethically, lovingly, and bravely each and every day,” she said later, adding that she hopes “to be able to share my story soon.”