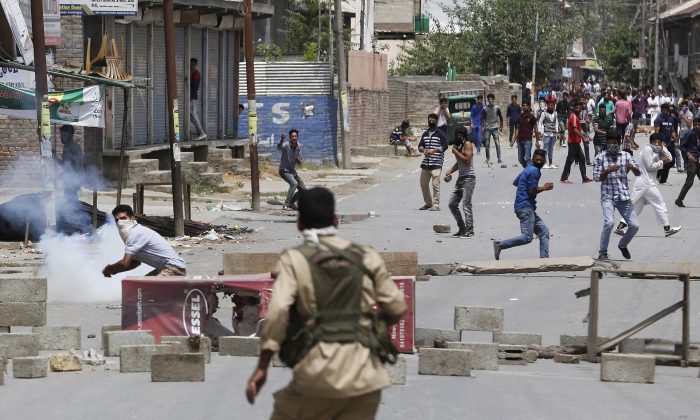 A masked Kashmiri protester prepares to throws a brick at an Indian policeman during a protest in Srinagar, Indian controlled Kashmir, on July 9, 2016. Indian authorities imposed an indefinite curfew in most parts of Kashmir on Saturday, a day after government forces killed the top rebel commander in the disputed Himalayan region, officials said, describing it as a major success against rebels fighting Indian rule. (AP Photo/Mukhtar Khan)
India

SRINAGAR, India—Indian troops fired on protesters in Kashmir on Saturday, killing at least seven as tens of thousands of people defied a curfew and participated in the funeral of a top rebel commander a day after he was killed by Indian forces in the disputed Himalayan region, officials said.

As news of the killing spread on Saturday, widespread clashes erupted in several neighborhoods in southern Kashmir as thousands of residents hurled rocks at Indian troops, who responded by using live ammunition, pellet guns and tear gas, two police officials said, speaking on condition of anonymity in keeping with department policy. They said at least 60 civilians were wounded in the clashes.

Sahai said that protesters attacked several police and paramilitary posts in the region. Some 90 government troops were injured, he said.

Street clashes spread to Indian Kashmir’s main city of Srinagar and at least a dozen places in central and northern Kashmir.

Muslim-majority Kashmir is divided between India and Pakistan and claimed in entirety by both. On India’s side, separatist politicians and rebels reject Indian rule over the region and have been fighting for independence or merger with Pakistan since 1989.

After separatist leaders asked people to march to southern Tral town for Wani’s funeral on Saturday, police warned that only local residents would be allowed to participate. But tens of thousands of mourners joined the funeral procession in defiance of the restrictions, chanting “Go India! Go back!” and “We want freedom!”

Wani’s body was buried in the late afternoon amid mass wailing and angry chants of anti-India slogans. Witnesses said at least two militants fired pistol rounds in the air to salute their fallen commander.

Earlier in the day, thousands of armed police and paramilitary soldiers in riot gear fanned out across most towns and villages in the region and drove through neighborhoods, warning residents to stay indoors.

Wani, in his early 20s, had become the iconic face of militancy in Kashmir over the last five years. He was a household name and his video clips and pictures were widely circulated among young people in Kashmir.

Unlike the rebel leaders of the early 1990s, Wani did not cover his face in videos widely circulated on cellphones.

Indian officials, fearing that the killing could lead to violent protests in the already troubled region, suspended an annual Hindu pilgrimage to a mountain cave which draws about half a million people each year.

Officials also suspended cellphone services in southern parts of Kashmir and blocked mobile internet in rest of the region to prevent anti-India demonstrators from mobilizing.

Wani was a small-town boy and the son of a school principal. Handsome and media savvy, he was widely credited for reviving armed militancy in Indian Kashmir in recent years, using social media like Facebook to reach out to young Kashmiri men.

Noor Ahmed Baba, a political scientist at Central University of Kashmir, said Wani “rose to become the symbol of resistance and defiance against the Indian state, mainly because he was politically sharp in his messages.”

“He revived militancy at a time when people were waning away from armed struggle and became a youthful face of the rebellion, a hero for not just young men but even so many older people,” he said.

Most people in Kashmir have long resented the Indian presence, and support rebel demands for an independent Kashmir or a merging with Pakistan.

More than 68,000 people have been killed in the uprising and the subsequent Indian military crackdown.