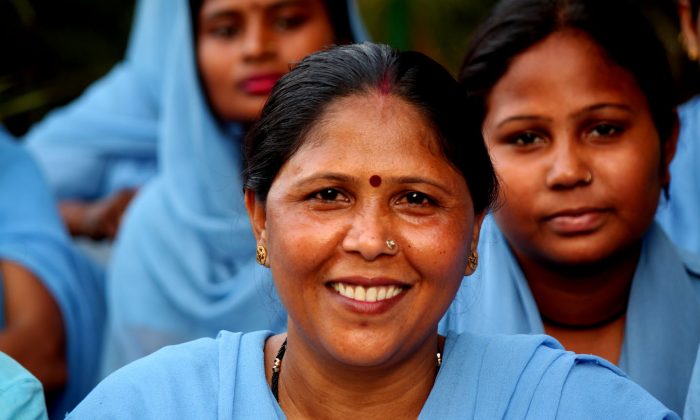 ALWAR, India—In a small city in India’s north, a community of illiterate women have broken free from the profession they were born into: cleaning rich people’s toilets. Now, they’re learning to read and write, speak English, and provide for their children’s education.

In the community of Chumars in Rajasthan state of India, these women traditionally had only this single profession. Because they did such filthy work, they and their families had to live in separate colonies.

“Since the age of seven, I started to accompany my mother who cleaned toilets everyday. Just as mothers teach their daughters to do various chores, my mother taught me how to clean other people’s toilets. She said, ‘After you get married this will help you earn a living,'” said Usha Chumar. Usha was married at age ten. She is now 35.

For centuries, people in India like Usha had little choice about their careers. Their birth determined their caste and their caste determined their profession. Thus, the son of a priest became a priest, the son of a warrior became a warrior, and the daughter of a manual scavenger became a manual scavenger. About one in seven Indians belongs to the lowest caste, the “Dalit”—or Untouchables. Among them are people like Usha who clean toilets.

While the affluent were able to break through this vicious cycle decades ago because of better access to education, the lower classes largely have not. People in Usha’s community continued to clean people’s dry lavatories even after India’s Dry Latrine Prohibition Act of 1993 banned the lowly profession.

“We couldn’t even take a holiday. Even when I was sick, I couldn’t take a rest, as they would come to my home looking for me,” said Usha. “I would tell them I’m sick, but they would say, ‘The filth is accumulating. It will only take a few minutes. Clean and go.”

Usha and the other manual scavenging woman had no means to break free from their derogatory profession. That is, until an NGO, Sulabh International, started mobilizing them. They gave them a formal education, job skills training, and more importantly a monthly stipend to work at their livelihood center called Naye Disha. It means “New Direction” in Hindi.

So far, the Naye Disha center has given a new direction to 112 women from the Chumar community of Alwar.

“[Naye Disha] is like a breath of life. When I told my mother-in-law about it, she said there’s no one who can help us break free from our profession. But now even she believes in it,” said Usha.

Usha was chosen as the President of Sulabh International by the organization’s founder, Dr. Bindeshwar Pathak. Now she has become the global face of the NGO and its work on sanitation and hygiene. Pathak is a well-known social reformer and an expert in low-cost sanitation.

Sulabh International established the Nayi Disha center in a rich residential area so that the women can psychologically break free from the sense of being Untouchables and feel dignity in mainstream society—something they have been denied for generations.

A woman named Vimla Sarvan works at the center. She lives in a mud hut beyond the concrete houses of the more affluent villagers. Vimla gave birth to a son 15 days earlier.

“I’m on a three-month maternity leave. My life changed after coming to Naye Disha. Earlier I just earned about 1500 rupees cleaning people’s homes every month, now I earn 3300,” Vimla said. Her husband earns 100-150 rupees everyday selling recyclable trash. “We are thinking of saving for our children’s education.”

Working at Naye Disha ensures Vimla a stipend during maternity leave, something that would have been impossible otherwise.

Inside Vimla’s house, on the mud wall, hangs a poster of a city harbor with tall skyscrapers. In the blue sky above is written, “Don’t wait for your ship to come in, swim out to it.”