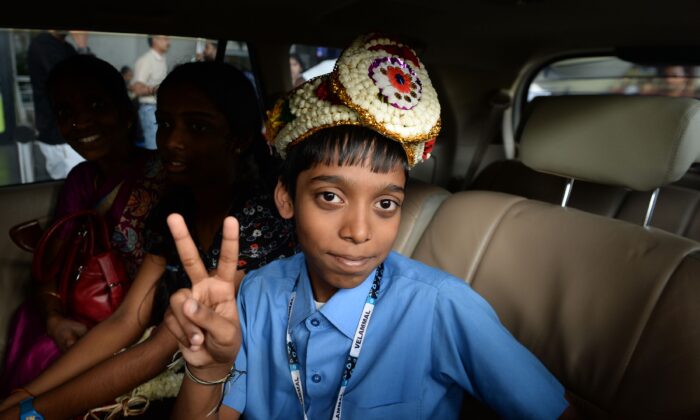 Indian chess prodigy Rameshbabu Praggnanandhaa poses for a photograph on his arrival at an airport in Chennai on June 26, 2018. (Arun Sankar/AFP via Getty Images)
Sports News

A 16-year-old Indian chess grandmaster on Feb. 22 became the youngest chess player ever to defeat world champion Magnus Carlsen, during the eighth round of the Airthings Masters.

The teen, Rameshbabu Praggnanandhaa, won the match with black pieces in 39 moves in a Tarrasch variation game and became the third Indian to defeat the 31-year-old Norwegian world champion—after chess legend Vishwanathan Anand and Pentala Harikrishna.

“It was very hard because the game also starts at 3 a.m. (09:30 GMT) in the morning and I also prepared for it by sleeping every day, changing my routine to adjust to the schedule and I think it really worked out,” said Praggnanandhaa.

“I was also working hard in chess terms and I was happy in general to win … it gives me huge confidence,” he went on to say.

What a wonderful feeling it must be for Pragg. All of 16, and to have beaten the experienced & decorated Magnus Carlsen, and that too while playing black, is magical!

“What a wonderful feeling it must be for Pragg. All of 16, and to have beaten the experienced [and] decorated Magnus Carlsen, and that too while playing black, is magical!” Tendulkar said on Twitter, referring to Praggnanandhaa by his nickname—”Pragg.”

Pragg was quick to thank Tendulkar for his post, saying the message means a lot to him. “Thank you very much, sir! It means a lot coming from you!!” he wrote.

“Welcome to the club [and] congrats Praggnanandhaa!! See u soon in Chennai?” Anand said on Twitter, noting in a separate message that he had always been proud of India’s chess talents.

Praggnanandhaa currently sits 14th on 8 points with a battle ahead to reach the knockout stage of the online chess championship.

The teen’s father, Ramesh Babu, said he was very happy with his son winning the chess duel with Carlson, who became world champion in 2013.

“I was very happy with the result … by that time I was sleeping … Praggnanandhaa came and told me that he won [against] Magnus Carlsen. He was very happy,” Babu said.