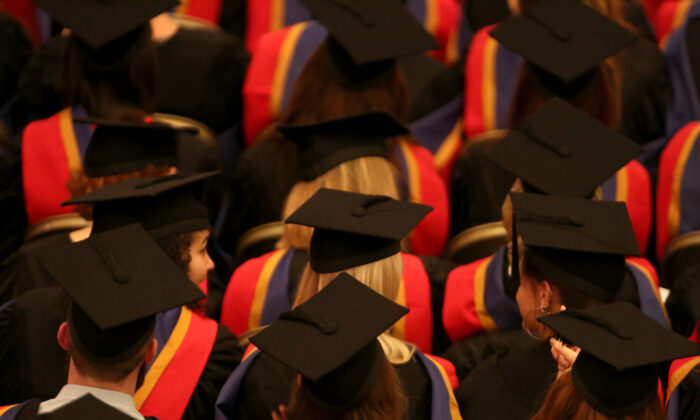 A graduation ceremony at the University of Suffolk's campus in Ipswich, England, in October 2015. (PA)
UK

Indians have overtaken Chinese nationals as the largest group to be granted sponsored study visas in Britain, following a 215 percent rise since pre-pandemic levels.

The Home Office revealed on Thursday that 486,868 sponsored study visas—the highest number on record—were granted in the year to June 2022, a rise of 71 percent on June 2019, the last year before the pandemic.

Earlier this month the British High Commissioner in New Delhi, Alex Ellis, told The Times of India: “There’s been a huge growth in Indian student numbers to the UK. We’ve got down to somewhere very low, less than 20,000 four or five years ago, now it’s up to 100,000, we want to go even higher.”

The surge in the number of Indian students wanting to attend Oxford, Cambridge, and many other Russell Group universities comes as the British government pushes for a free-trade agreement with India.

Boris Johnson visited Delhi in April and met Prime Minister Narendra Modi and he has been keen to forge an Anglo-Indian axis in both trade and political outlook in the wake of Brexit and worsening relations with China.

Britain and India recently signed a memorandum of understanding on mutual recognition of educational qualifications, which makes it easier for Indian students to come to Britain and vice versa.

The Home Office report also goes into detail about other aspects of immigration, including asylum seekers and those in detention, and it highlighted a huge growth in the number of illegal immigrants coming from Albania.

The report says, “This is higher than at the peak of the European migration crisis (36,546 in year ending June 2016) and is the highest number of applications for almost two decades (since 2003).”

The figures show asylum is rarely refused to those coming from Syria, where 98 percent of requests were granted, or Afghanistan and Eritrea (both 97 percent), Sudan (92 percent), or Iran (85 percent).

The report goes on to point out how Brexit has reduced Britain’s ability to refuse asylum.

It says, “This rise in grant rate is in part because of the low number of refusals (including third country refusals, which have been affected by the UK leaving the EU).”

The Home Office says there were 2,038 people in immigration detention in the year ending June 2022, 24 percent more than pre-pandemic levels at the end of December 2019.

Of those who left immigration detention, 85 percent were released on bail, usually because they had applied for asylum.

Most of those deported were foreign national offenders, more than half of whom were EU nationals.