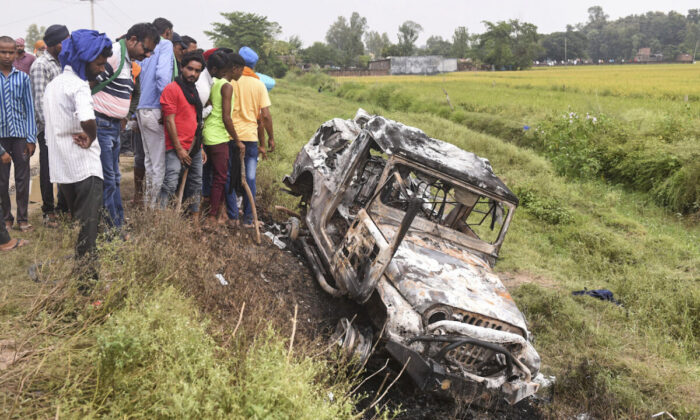 The son of a junior minister in India’s government was arrested by police on Saturday after a recent protest escalated and ultimately left nine people dead.

Officials and farm leaders said four farmers died after a car ran over a group of farmers who were protesting on Oct. 3 in Lakhimpur Kheri, a town in Uttar Pradesh state.

The car belonged to Junior Home Minister Ajay Mishra. Farm leaders accused Mishra’s son of having been in the car when it ran over the protesters, but he denied it.

Protesters beat the occupants of the car with sticks after the incident. Mishra’s driver and three members of the ruling Bharatiya Janata Party, who were all in the car, were all killed.

Ashish Mishra, the son of the minister, was arrested in connection with the deaths of the four farmers. He failed to present any evidence that could prove he was not present in “any of the three vehicles that plowed through a crowd of farmers killing four of them,” police officer Upendra Agarwal said on Saturday.

But Ajay Mishra maintained his son was innocent because he was not in the area.

Separately, police said that they also recovered the body of a local journalist in the area, but did not provide extra details.

Police said earlier this week they so far arrested a total of six people and filed a criminal complaint against 14 others, including Ashish Mishra.

Meanwhile, the Bharatiya Janata Party lodged a criminal complaint against the farmers over the deaths of the driver and BJP members in the car, said Arvind Chaurasia, a senior official in charge of the district.

Ongoing protests have played out in India since the Modi government in September 2020 enacted laws to deregulate India’s agricultural industry and provide the farmers with more autonomy to sell their goods to independent purchasers, rather than to government-sanctioned buyers.

The government said the new farm laws would encourage growth in the farming sector through private investments.

Farmers who protest the new laws have asserted the agricultural reforms would end guaranteed pricing for the crops they sell, which means they may have to sell their crops to corporations at cheaper prices.

Experts have said the reforms are needed and what is happening is a challenge often seen whenever a government in a functional democracy tries to enact mass reforms, The Epoch Times previously reported.

Venus Upadhayaya and The Associated Press contributed to this report.