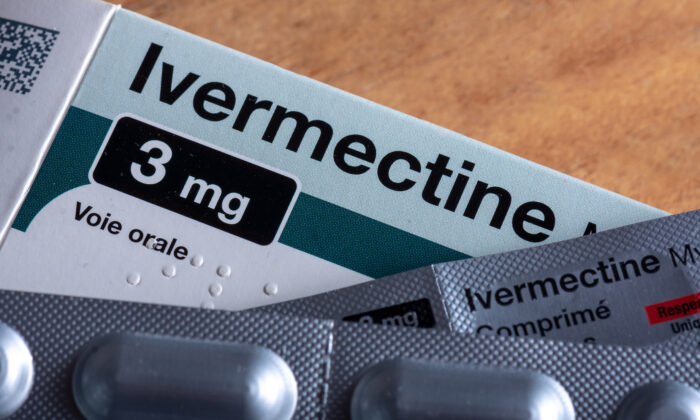 A box of ivermectin (French packaging), an anti-parasitic drug and also a potential treatment for COVID-19, in Clamart, France, on April, 2, 2021. (Shutterstock)
India

COVID-19 “medicine kits” containing ivermectin, azithromycin, and vitamins D and C are being distributed in the Indian city of Varanasi as part of measures to prepare for surge in cases of COVID-19.

A large quantity of the kits were procured from the government by District Magistrate Kaushal Raj Sharma, and distribution in the city began on Jan. 1, said Additional Chief Medical Officer Dr. Sanjay Rai, the Hindustan Times reported.

Varanasi is located in Uttar Pradesh, a state in northern India with over 200 million people. The city has an estimated population of over 4.2 million.

“A total of 874 committees will distribute the kits in rural areas under eight primary health centers in developmental block areas of Varanasi,” Rai said.

The COVID-19 medicine kits are also being made available at other locations in the city, including at seven hospitals, railway stations, bus stands, and a prison, according to the Hindustan Times.

Rai said different kits will be made available for varying age groups.

“The kits for children from birth to 1 year, and 1–5 years contain paracetamol drops, [oral rehydration salts], and multivitamin drops. While for 5–12 years, it has paracetamol tablets, ivermectin 6 mg and vitamin B complex,” he said.

“Azithromycin 500, ivermectin 12 mg, vitamin D3, vitamin C, zinc, vitamin B complex, and paracetamol tablets are available for those above 12 years,” he added.

Chief Medical Officer Dr. Sandeep Chaudhary told ANI that the medicine kits are being distributed as part of a preventative measure in the city, amid fears of a third wave of COVID-19.

“We’ll give these kits to people getting tested for COVID. We have already distributed 50 kits each to vigilance committees in rural and urban areas,” he said.

Following a slight uptick in COVID-19 cases in the city, the district magistrate urged residents to adhere to measures to curb the spread of the virus, including including wearing masks, sanitizing hands frequently, and social distancing.

Medicine kits have previously been distributed in Uttar Pradesh to tackle rising COVID-19 cases and contain transmission in May 2021, but it isn’t clear if the government has ever formally disclosed the contents of those medicine kits. According to Dr. Robert Malone, who helped develop the mRNA vaccine technology, one of those components was rumored to be ivermectin, but this was not confirmed.

Although ivermectin is an FDA-approved anti-parasitic, the U.S. Centers for Disease Control and Prevention has warned against its use as a treatment for COVID-19. Ivermectin is available in both human and veterinary products.

The CDC says people have been hospitalized after self-medicating with a form of ivermectin used to treat livestock for parasites, and that large doses can be fatal. Ivermectin has been prescribed as an anti-viral and anti-parasitic for human use for decades and its creator won a Nobel Prize in 2015.