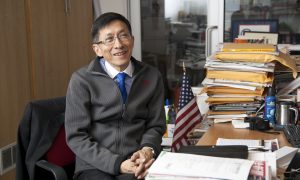 Silicon Valley insider Venk Shukla has enjoyed a colorful past. He has led a scholarship fund for the poorest kids in India to become doctoral graduates from  Ivy League schools, was the vice president of marketing in Cadence Design Systems, and received his MBA from MIT, among numerous other accomplishments.

This week, TiE, which stands for The Indus Entrepreneurs, is holding its annual entrepreneurship conference in California that draws several thousand people each year. Shukla, 60, is also president of TiE. He explained the motivation behind TiE.

At TiE, the biggest names from the tech industry attend alongside people coming straight out of college.

One of the stealth companies that has captivated Shukla is a company that makes smart shirts, which have sensors in the fabric to monitor the body, bringing to life what was once only science fiction.

“The founders of TiE believe that wealth creation is a noble goal, and they believe that the best way to create wealth is through entrepreneurship.”
— Venk Shukla, president, The Indus Entrepreneurs

Shukla said he was also intrigued by technology that would turn cities into smart cities. The technology would control street lights, traffic lights, and determine the price of parking, changing from $1 to $10 depending on conditions. He wouldn’t give away the names of the companies yet, but promised we’d hear more from them.

The TiE parallels the generosity of Silicon Valley corporate culture that Shukla likes, where legend states that CEO of Intel Andy Grove answered a phone call from a young man, who was actually Steve Jobs, and gave Jobs advice.

“People actually take the time to talk to me and find time for a coffee, and that I find very, very valuable,” said Shukla, adding that that accessibility is hard to find elsewhere.

Rules to a Virtuous Cycle

Shukla believes that sharing the knowledge and experiences one has accumulated over time is an incredibly fulfilling way of giving back to the community.

In 1994, he and a friend got together to start a scholarship fund in India, called Foundation for Excellence, to help the “really, really poor kids who had no chance in hell to pay” for the education they deserved. Shukla said that he himself came from a small village in India. When he came to America in 1983, he had been giving scholarships to the young people in his village.

The fund concentrated on medical and engineering schools, which are some of the most expensive schools in India. But in order to make the fund successful, Shukla and his friends laid down several strict and unusual rules.

The fund was run by volunteers who had to pay for their own transportation expenses. If volunteers asked for reimbursement, they were blacklisted.

“We were looking for people who were willing to spend their time and money to help others because they genuinely enjoyed helping others,” said Shukla. “So we were very strict in terms of who we accepted as our volunteers.”

They sent students 100 percent of donor money, and raised money through their own means to pay for administrative costs. Students could take the money, under one condition: If the student became financially well-off, they would fund other students’ education in the future.

Foundation for Excellence has become India’s largest scholarship-giving organization. Drawing on donations from Indian companies, its funded about 13,000 students in a virtuous cycle. Students have gone on to obtain doctoral degrees at Stanford, University of Chicago, Carnegie Mellon, and other schools. Some are working at Google, Facebook, Cisco, and other big companies. Despite its success, the organization has kept a low profile.

“It has become a self-sustaining organization that has been extremely satisfying. You are taking kids with huge potential but zero chances of going anywhere in society and putting them on a path where they could achieve huge success in life,” said Shukla, who headed the organization for 18 years before handing it over to his friend.

Over the decades, Shukla has pursued his interests and he said he’s a happier man than he would have been if he had stuck with big-name companies.

“I only involve myself in things that I’m really excited about,” he said. “It doesn’t feel like work.”