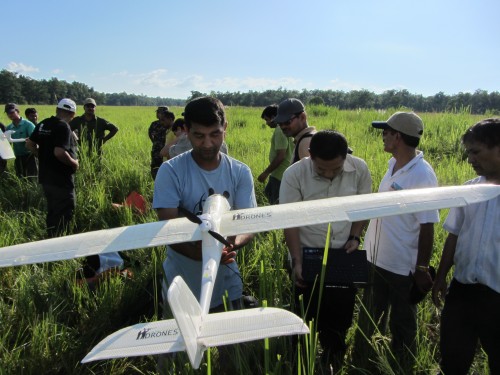 Following the success of a pilot drone project at the Panna Tiger Reserve (PTR) in Madhya Pradesh earlier this year, the Indian government now plans to start using drones or unmanned aerial vehicles (UAVs) to transmit real-time images of wildlife in up to 10 biodiversity hotspots – including the Sunderbans, the Western Ghats, and the Himalayas – across India by January 2015.

These budget, hand-launched devices, which are capable of using GPS for autopilot missions, can record videos and images that can then be relayed back to the station on a real-time basis.  These drones can also be equipped with night-vision cameras for night surveillance in remote areas.

What’s more interesting is that, besides monitoring movement of tigers and other animals, these drones can also aid in keeping tabs on poachers as well as support census activities.

The initiative in the PTR, which was organized by the National Tiger Conservation Authority (NTCA), was a joint venture by World Wide Fund for Nature (WWF) International, a US-based company called Conservation Drones, and Wild Life Institute of Indian (WII).

“Currently the proposal is being developed to upscale it to 10 sites. We are aiming for a five-year project. If we get the required approvals, we could start in January 2015. This will add to the existing infrastructure in wildlife research and management as well as surveillance,” said K. Ramesh, Wildlife Institute of India (WII), Dehradun, and UAV project coordinator.

Ramesh also added that it was about time the Indian government took a multi-faceted approach to wildlife, considering that such measures to monitor critically endangered animal species as well as to keep an eye on human activities are already in place in countries like Nepal and Indonesia.

“Given India’s vast biodiversity and the issues plaguing wildlife, aerial surveillance is of urgent need. We have therefore selected 10 sites for the proposed project, corresponding to each of the ten bio-geographic zones of the country. Some of these important sites being the Sunderbans, the Himalayas, the Western Ghats, as well as other biodiversity hotspots,” said the scientist.

Besides acting as a deterrent to poachers, Ramesh pointed out that technological interventions would also lift the morale of officials and make the field of wildlife management look attractive.

The drones for the proposed project would be indigenously sourced and the officials involved would be properly trained to ensure operational efficiency. Each of the drones, which would cost less than Rs. 5 lakh each, can stay in flight from 30 minutes to an hour. And according to Ramesh, the wildlife surveillance missions would not require more than 20-30 minutes of flight time.

The pilot project, which was kicked off in January this year, had to be first given a green signal by the defense ministry. The scale-up would require similar permits as well. Moreover, the detailed proposal would also be presented to the National Tiger Conservation Authority for funding.

Other notable people from the field also welcomed the proposal and shared their thoughts.

“Difficult terrains where people can’t go on foot or by vehicle can become accessible with the use of drones for wildlife surveillance,” said A. S. P. Yadav, deputy inspector general of the NTCA.

Leading conservationist and Director (Central India) of Wildlife Protection Society of India (WPSI), Nitin Desai hailed the proposal as a positive move and commented that any kind of advanced technological intervention for wildlife protection and conservation is welcome.

This article was originally written and published by Rohit Daniel, a contributing writer for indiasendangered.com. For the original article and more info, please click HERE.