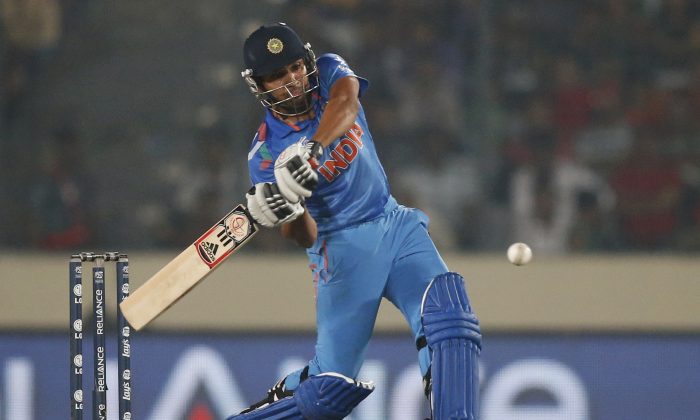 UPDATE: India won by 73 runs, sealing a spot in the semifinals.

India has no matches before the semifinals while Australia will face Bangladesh on April 1. See the full schedule, including results, here.

The teams will face off at the Shere Bangla National Cricket Stadium in Dhaka, Bangladesh.

The game will be broadcast on STAR Sports in India and the rest the Indian Sub-Continent (Bangladesh, Nepal, Sri Lanka, Maldives, Bhutan); Fox Sports in Australia; and SKY TV in New Zealand.

It will also be shown on PTV in Pakistan; Astro in Malaysia and Brunei; Lemar TV in Afghanistan; and Star Cricket in Papua New Guinea, Singapore, Hong Kong, and the Philippines; ESPN3 in the Caribbean, South America, Central America, United States, Mexico; OSN Sport Cricket in North Africa and the Middle East; Supersport in South and Sub Saharan Africa; SKY Sports in England, Wales, Scotland, and Ireland; and Eurosport in the rest of Europe.

India currently sits atop Group 2 of the SUper 10 with three wins and zero losses. It beat rival Pakistan by seven wickets in its first match before topping the West Indies by eight wickets and Bangladesh by eight wickets.

Australia is on the bottom of Group 2 after losing twice. It lost to Pakistan by 16 runs and West Indies by six wickets.

India won the last match between India and Australia back in October 2013.