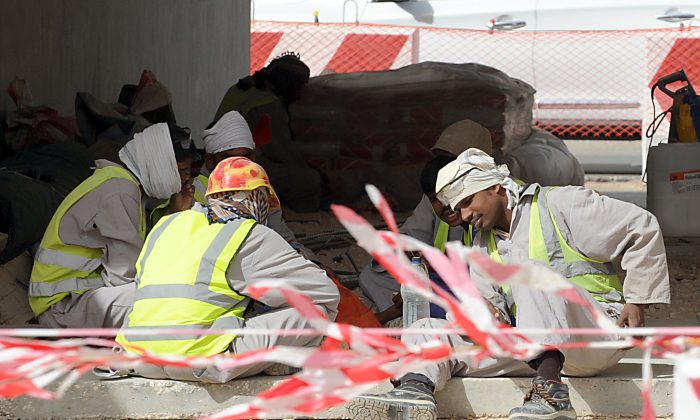 Large numbers of Indian workers might return back home in the coming months, as the three months grace period given by the Saudi Arabian government for the implementation of a new labor law has come to an end.

The Saudi government has been trying to implement Nitaqat law (to cut employment in the country), which makes it compulsory for every local company to employ one Saudi national for every ten migrant workers.

The Arabain Gazatte mentions that private companies in the country have been traditionally reluctant to employ Saudi workers, who are paid more than foreigners and enjoy more worker protections. Currently Saudi nationals form only tenth of the total workforce in the private sector. This led the Saudi government to initiate reforms.

There are growing fears that the reforms will gravely affect Indians who form the largest workforce in the country.

There are over two million Indian are currently working in Saudi Arabia and over 18,000 Indians have already approached the Indian embassy in Riyadh seeking emergency certificate to leave the country amid concerns about possible job losses.

According to media reports, Vayalar Ravi, an overseas Indian affairs minister, told the Indian Parliament that the increase in the number of applications seeking Emergency Certificate was due to Saudi authorities’ campaign against foreign workers staying in the country without fulfilling laid down conditions and not due to Nitaqat law, and that this drive would affect illegal workers from all countries migrated to Saudi Arabia.

Ravi led a delegation to the Gulf nation in April during which India expressed its concern about the reforms. In the meeting, both the sides have reportedly agreed to set up a joint working group to address all immediate problems facing the Indian community.

Indian government also asked the migrant workers not to turn paranoid because of the reforms and that the government is trying to do its best.