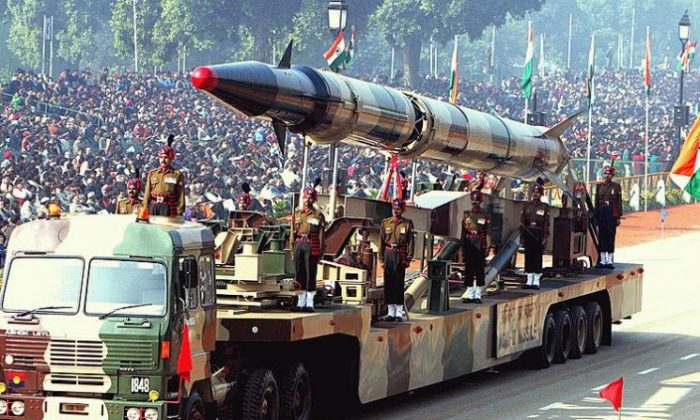 India announced that it successfully test-fired a nuclear-capable intercontinental ballistic missile known as the Agni-V.

In a tweet, Indian Defense Minister Nirmala Sitharaman said the missile launch marks a “major boost to the defense capabilities of our country.”

Smt @nsitharaman congratulates @DRDO_India , the Armed Forces and Defence Industry for the successful flight test of the long range ballistic missile Agni-V. A major boost to the defence capabilities of our country. #MakeInIndia4Defence https://t.co/Jl2mh6gEWn

The missile was tested from Dr. Abdul Kalam Island in Odisha state, according to the Economic Times. The Agni-V ICBM has a strike range of about 3,100 miles, which can cover most of China.

The missile traveled 19 minutes and covered about 3,000 miles, said the report.

Only the United States, France, Russia, and China are known to have ICBMs.

“All objectives of the mission have been successfully met. This successful test of Agni-5 reaffirms the country’s indigenous missile capabilities and further strengthens our credible deterrence,” said India’s defense ministry.

Times of India noted that when Agni-V is fully operational, India will join a still more “super-exclusive club of countries with ICBMs like the US, Russia, China, France, and the UK.”

“The missile’s flight performance was tracked and monitored by radars, range stations and tracking systems all through the mission. All mission objectives were successfully met. This successful test of Agni-V reaffirms the country’s indigenous missile capabilities and further strengthens our credible deterrence,” said a defense ministry official, according to the Times of India.