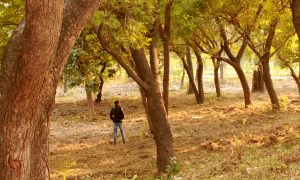 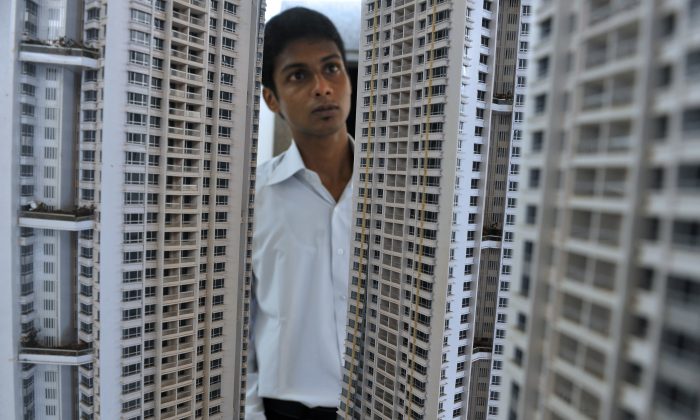 Indian sales executive looks at a model of an luxury apartment complex on a construction site of an apartment tower in Mumbai on August 9, 2010. (Punit Paranjpe/AFP/Getty Images)
Business

It is a situation all too typical for Indian homeowners. A local developer promises to build luxurious villas and apartments—in this example it was in the heart of the south Indian city of Kochi—and collects over Rs 100 crore ($15.7 million) from potential home buyers to fund the project. Rs is a term for 1 trillion in Indian currency.

The builder eventually misses several deadlines, and the firm’s directors are nowhere to be found, after withdrawing all the money from their bank accounts.

Apple-A-Day Properties already had two successful projects up and running, and their buyers had no reason to suspect the company would not complete. The problem is, those who handed over the millions had no way of knowing, and no protections either, because the country’s real estate market is virtually unregulated.

Indian police said this is only the tip of the iceberg. With India’s urban middle class growing at a rapid pace, and along with it an increase in the demand for luxury homes, fraud in the industry is rife.

According to a report by India’s National Crime Records Bureau, there were 181 cases of property lost under criminal breach of trust in 2013, in the nation’s capital of Delhi alone.

According to the standards set by the Asian Development Bank, just over a quarter of India’s 1.2 billion people fall into the middle class. However, in sheer numbers, that’s about as many people as the population of the United States. According to different projections, India’s middle class is expected to grow to anywhere between 500 million and 1 billion by 2025.

It isn’t prices that are keeping buyers away.

And these numbers should suggest a booming real estate market.

However, recent data from property consultancy Liases Foras Real Estate Rating and Research Pvt. Ltd. shows that the market in the National Capital Region (NCR) around Delhi is actually slowing. Only 9,020 housing units were sold between January and March, compared to 15,053 units during the same period last year.

It isn’t prices that are keeping buyers away. Discounts, easy installment schemes, and even offers of free cars and flatscreen TVs, haven’t helped the sale of real estate in the NCR. Property advisers point to the fact that buyers now trust developers less than ever, owing to the large number of buyers who have fallen prey to scams and delayed projects.

A Bill to End All Sorrow

In 2013 the government finally proposed legislation, the Real Estate (Regulation and Development) Bill, that would protect the interests of homebuyers.

The middle class welcomed it. It would ensure safer homes delivered on time. Buyers wouldn’t be hoodwinked into paying more for less, and they wouldn’t end up unknowingly living in illegally built apartments.

The expectation is that established protections for potential homebuyers would fuel a new era of apartments tower projects, especially in growing urban centers.

Introduced by the former Indian National Congress-led coalition government, it included provisions like setting up a regulatory body to monitor projects. Developers would be required to register with and submit all plans to this body before beginning any projects, including layout plans and the schedule for completion.

It also mandated that developers set aside 70 percent of the funds paid by buyers in a separate bank account, to prevent their use for unrelated projects, although it would have allowed states to reduce this percentage later as states saw fit.

The passage of this bill would not only have protected buyers’ interests, it would have been instrumental in combatting India’s huge black money problem. The unregulated real estate market has become a major channel for investment of unaccounted-for cash.

However, since the bill was introduced so close to the 2014 national election, it was never voted on by Parliament.

Modi’s pro-business Bharatiya Janata Party (BJP) won the country’s national election by a landslide. When it came into power, it made several changes watering down the Real Estate Bill’s protections for homeowners, and announced plans to bring it to a vote during the current session of Parliament, which is expected to conclude this week.

The changes made by the BJP include reducing the percentage of funds to be set aside from 70 percent to 50 percent, and writing in a clause that would allow delayed projects to escape being penalized.

Passing a bill that would limit a developer’s freedom to move funds could potentially hurt corrupt politicians.

While the previous bill had very clear definitions for calculating square footage area, the amendment muddied that too, leaving room for uncertainty as to how much area the buyer would actually pay for.

Critics said the changes reflect the strong ties between politicians and builders that exist in India.

It is a well-known fact that the two groups are in cahoots. Legally, big developers are an important source of campaign funding. Illegally, politicians and builders have often allegedly made secret deals for personal profit. Even states’ chief ministers have been accused of embezzling money through big development projects.

Passing a bill that would limit a developer’s freedom to move funds could potentially hurt corrupt politicians, an embedded problem that has dogged India’s ability to enact reforms time and time again.

After 10 years in power, even the previous government only introduced the bill toward the end of its second term—a move widely seen as an obvious ploy to win middle-class votes.

While the Congress Party, now part of the opposition, has hardened its stance on the changes made by the Modi government, it would be prudent to note that last fact.

Last week the Congress Party Vice President Rahul Gandhi spoke to homebuyers in Delhi and indicated that he would be present at a protest against the passage of what many, including his party, believe is pro-builder rather than pro-buyer.

On Wednesday, May 6, a united opposition of national and state parties forced the government to refer the bill to a select committee for scrutiny.