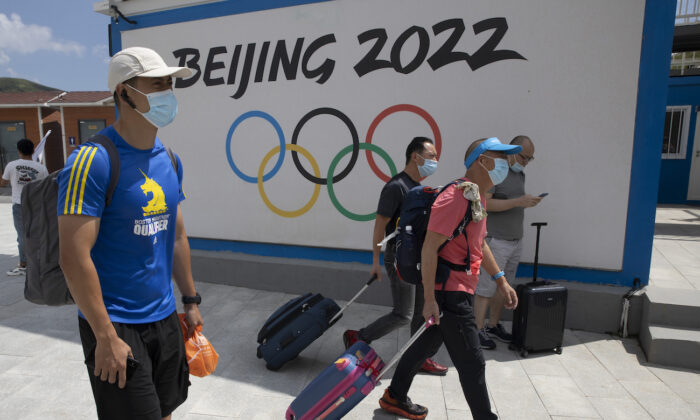 Visitors to Chongli, one of the venues for the Beijing 2022 Winter Olympics, pass by the Olympics logo in Chongli in northern China's Hebei Province on Aug. 13, 2020. (AP Photo/Ng Han Guan)
International Relations

NEW DELHI—India announced a diplomatic boycott of the Beijing Olympics on Feb. 3 after the Chinese Communist Party (CCP) picked a People’s Liberation Army (PLA) soldier involved in a bloody 2020 conflict with India as a torchbearer in the Games’ torch relay. India’s state broadcaster also decided to not telecast the opening and the closing ceremonies of the Games as a result.

“It is indeed regrettable that the Chinese side has chosen to politicize an event like the Olympics … the Charge d’Affaires of the Embassy of India in Beijing will not be attending the opening or the closing ceremony of the Beijing 2022 Winter Olympics,” said Arindam Bagchi, the official spokesperson of the Ministry of External Affairs on Thursday.

The Indian government was considering sending its top diplomat to Beijing to attend the opening of the games until this week, but then Beijing made a PLA regiment commander, Qi Fabao, a torchbearer of the games on Wednesday, irking India. Qi had been involved in a violent border clash with Indian soldiers in the Himalaya’s Galwan Valley in June 2020.

New Delhi had earlier decided to set aside its problems with China following a meeting between the foreign ministers of India, Russia, and China in November, and supported the Games that were boycotted by many countries including the United States.

This was because traditionally India doesn’t believe in politicalizing sports events and has never boycotted one since its existence, according to Srikanth Kondapalli, a professor of Chinese studies at Jawaharlal Nehru University, New Delhi.

But India was blindsided when Qi who had sustained head injuries during the Galwan clash took the flame from Wang Meng, China’s four-time Olympic short-track speed skating champion. While doing so both “made military salutes to each other,” reported Chinese state media Global Times.

“The inclusion of a PLA soldier who tried to kill Indian soldiers at Galwan in 2020 in the Olympic torch relay was a provocative act that triggered the decision to boycott,” Madhav Nalapat, strategic analyst and vice-chair of the Manipal Advanced Research Group, told The Epoch Times.

To India, Qi’s participation is a politicization of the Games because the only criteria of his selection as a torchbearer was his involvement in Galwan conflict, said Kondapalli of Jawaharlal Nehru University.

Frank Lehberger, a sinologist specializing in CCP policies and a senior fellow at the Indian think tank Usanas Foundation, told The Epoch Times that long before the Olympics started he expected China to “concoct some symbolisms” to humiliate India during the Olympics as revenge for PLA’s “humiliating defeat at Galwan Valley.”

The Galwan conflict, which took place in the Himalayan border region for eight hours on June 15, 2020, claimed the lives of 20 Indian soldiers. The hand-to-hand combat involved PLA soldiers attacking Indians with iron rods and batons wrapped in barbed wire.

After refusing to disclose its casualty count for eight months, the CCP admitted in February 2021 to losing four soldiers, when ahead of Party’s 100 anniversary, it announced military honors posthumously for them.

However, an investigative report citing findings from a group of social media researchers published by Australian media outlet The Klaxon on Wednesday said that China lost 38 soldiers, mostly drowning in the sub-zero temperature waters of the Galwan river.

The PLA soldiers honored with the “July 1 medal” in 2021 were a part of 29 CCP members honored on the occasion. The July 1 medal is a decoration bestowed by the Party’s paramount leader on those members of the CCP who make outstanding contributions to the Party in  “China’s revolution, reform, and opening up” according to CGTN, the overseas arm of China’s state broadcaster.

Chinese leader Xi Jinping, who awarded the medals in a ceremony held in Beijing’s Great Hall of the People on June 29, 2021, said the recipients had “staunch faith.”

Global Times reported at the time that having staunch faith “is to stay true to the original aspiration and dedicate everything, even the precious life, to the cause of the Party and people.”

Lehberger said India should have understood the CCP’s character and seen this coming. “And India’s reluctance joining the boycott [earlier] was understood by the Chinese side as the signal that they could act in even more provocative way,” he said.

Satoru Nagao, a non-resident fellow at the Washington-based think tank Hudson Institute told The Epoch Times that only 25 countries are attending the opening ceremony and most of them are “non-democratic” countries, adding that India’s decision to diplomatically boycott the Games was “good.”

This incident is not the first time the CCP has used the Galwan conflict to send a message. Over the New Year, various Chinese state media shared videos of PLA soldiers raising a CCP’s red flag at Galwan Valley.

And on Dec. 29, the Chinese announced “standardized” Chinese names for 15 places in Arunachal Pradesh, an Indian state on the border with Bhutan and Burma that the Chinese regime has attempted to claim and aggressively intruded upon in the past few decades.

“It shows that Chinese nationalism is directed against India,” said Kondapalli, adding that there’s a need to watch out to see if this portends more aggression towards India in the future.

China will next host the 2022 Asian Games in Hangzhou in eastern China’s Zhejiang Province from Sept. 10 to 25.