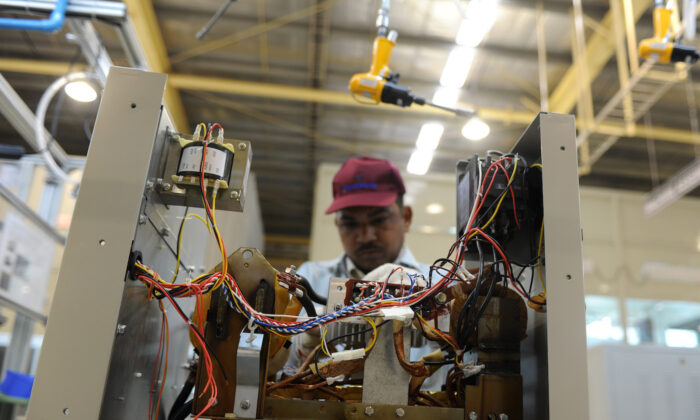 A file image of an Indian employee works at the electronics factory at Jhajjar in Haryana on Dec. 12, 2012. (Sajjad Hussain/AFP via Getty Images)
Asia & Pacific

The Indian government on Dec. 15 approved a 760 billion rupee ($10 billion) incentive scheme for the development of semiconductors and display manufacturing ecosystems, with the goal of positioning India as a global electronics manufacturing hub.

“The program will usher in a new era in electronics manufacturing by providing a globally competitive incentive package to companies in semiconductors and display manufacturing as well as design,” the government said in a statement.

Taking into account the government’s recent incentive approval, India has allocated a total of 2 trillion rupees ($30 billion) for electronics manufacturing.

“The program will promote higher domestic value addition in electronics manufacturing and will contribute significantly to achieving a $1 trillion digital economy and a $5 trillion [Gross Domestic Product] by 2025,” it stated.

Prime Minister Narendra Modi said via Twitter that the latest incentives scheme “will encourage research and innovation in the sector” and is expected to “strengthen the dream of an Aatmanirbhar Bharat,” which refers to India’s economic self-reliance.

Indian minister for electronics and information technology, Ashwini Vaishnaw, said that Modi’s Union Cabinet has made “a historic decision” to approve the semiconductor development incentive, placing India “in the league of strong manufacturing nations.”

“Me and my team had been working tirelessly in this [semiconductor] project for months now, and we expect the first set of announcements—on compound semiconductor manufacturing—to be made in the next three-four months,” Vaishnaw told reporters, reported Times Of India.

The minister noted that India is expecting an investment of around 1.7 trillion rupees (US$22 billion) in the next four years and that the government plans to develop a talent pool of 85,000 highly talented engineers through the program.

The Indian government has been negotiating with Taiwan for a free-trade agreement and the setting up of a linked semiconductor manufacturing hub in India, according to state media Hindustan Times on Dec. 16, citing people familiar with the matter.

India has proposed several sites for Taiwan to set up one of its semiconductor giants, but they have yet to finalize a decision, sources said, adding that Taiwan has also planned to open a representative office in Mumbai to boost its free-trade agreement with India.

However, one of the sources claimed that setting up a hub for Taiwan’s semiconductor giants, such as Taiwan Semiconductor Manufacturing Company and the United Microelectronics Corporation, might be a “complicated process” as their components come from various firms.