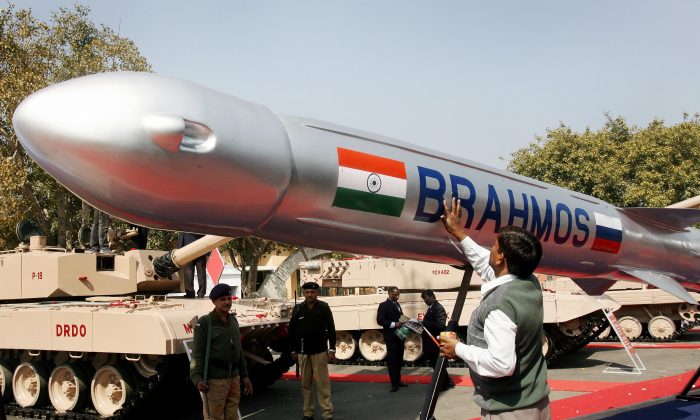 A Brahmos missile on display at the inaugural ceremony of the international DefExpo 2008 defense fair, in New Delhi on Feb. 16, 2008. (Raveendran/AFP via Getty Images)
India

The Indian Air Force (IAF) said April 10 that officials found responsible for the operational lapse that resulted in the March 9 misfire of a supersonic cruise missile into Pakistan will face a “severe punishment.”

The IAF concluded from its investigation that some officials violated standard operating procedures, resulting in the accidental firing of a missile, India-based news agency ANI reported, citing unnamed government sources.

“More than one official has been found blameworthy for the incident, which was totally avoidable. The guilty officials would be given a swift and severe punishment,” the government sources were quoted saying in the report.

One of the officials is the commanding officer of the Brahmos unit, a group captain (colonel), according to unnamed sources cited by the Times of India.

“The overall standard operating procedures for the operations, maintenance, and inspections of such missile systems have also been reviewed,” the sources said.

The sources did not specify the nature of the punishment to be meted out to the officials, but claimed that the IAF inquiry committee report would be “legally vetted” before being submitted to authorities for further action.

On March 11, the Indian Defense Ministry confirmed that it had accidentally fired a missile into Pakistan’s airspace on March 9, blaming the incident on “a technical malfunction” during “routine maintenance.”

The missile reportedly flew about 77 miles into Pakistan and crashed into Mian Channu, originating from the Indian city of Sirsa. There were no casualties reported as a result of the incident, but some civilian property was damaged.

Pakistan was reportedly prepared to launch a missile in retaliation against India but refrained after identifying an anomaly in the Indian projectile during “initial assessment,” Bloomberg reported on March 15, citing sources familiar with the matter.

The sources, who spoke to Bloomberg on the condition of anonymity, said that India did not inform Pakistan about the incident via a direct hotline between senior army officials of the two nations. Pakistan then reported the incident the following day and summoned an Indian diplomat.

“If Pakistan’s Air Force didn’t pick it up inside India and it was matched with an accident reaction, do people realize the implications, consequences of that,” Pakistani Foreign Minister Shah Mahmood Qureshi told reporters on March 15.

Pakistan and India, which both possess nuclear weapons, have clashed over territory in recent years. The two nations have been embroiled in a conflict over the area of Kashmir for decades. Military experts have repeatedly warned about the risk of miscalculation or nuclear accidents between the two neighbors.

The two countries came close to a war in February 2019 when Pakistan’s air force shot down an Indian fighter jet and captured its pilot over Kashmir. The two nations have waged several wars since they gained independence in 1947 from British rule.