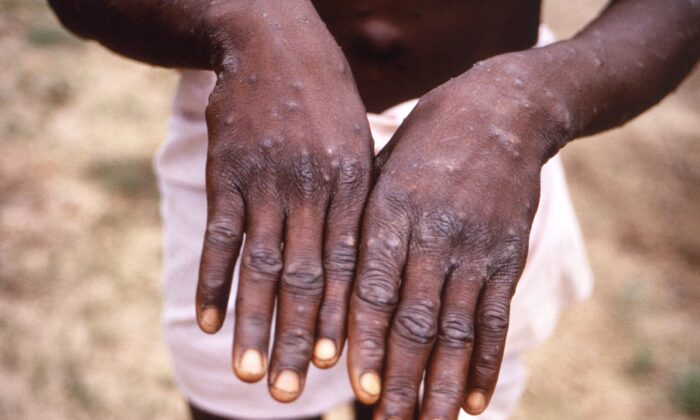 A 1997 image of the hands of a monkeypox case patient in the Democratic Republic of the Congo (DRC), formerly Zaire. (CDC via AP)
India

One case of monkeypox has been identified in India’s Kerala state, a government official confirmed on Thursday.

Kerala State Health Minister Veena George said that a 35-year-old man who returned from the United Arab Emirates on July 12 has tested positive for the monkeypox virus.

The patient was in stable condition and had been placed in isolation.

“There is nothing to worry about or to be anxious about. All the steps are being taken and the patient is stable,” George was quoted as saying by Zee News.

The patient’s primary contacts, including his parents and 11 passengers who sat near him on the flight, have been identified and will be monitored.

George said the patient had close contact with a monkeypox-infected person abroad and developed symptoms. The National Institute of Virology received his samples on Thursday and confirmed that his test result was positive.

India deployed a multi-disciplinary Central team to assist the state health authorities in investigating the outbreak and instituting requisite health measures, according to a memorandum published by ANI news agency.

Monkeypox is a zoonotic disease—the virus spreads from animals to humans—with symptoms similar to those of smallpox patients, but it’s clinically less severe, according to the World Health Organization (WHO).

Monkeypox Not a Global Concern: WHO

The WHO has previously concluded that monkeypox does not constitute a public health emergency of international concern, which is defined as “an extraordinary event” that requires a coordinated international response.

But WHO director-general Tedros Adhanom Ghebreyesus said on Tuesday that a meeting with the relevant committee will be held next week to assess the trends of the outbreak and decide whether it poses a global threat.

“The Emergency Committee for monkeypox will reconvene next week and look at trends, how effective the counter-measures are, and make recommendations for what countries and communities should do to tackle the outbreak,” he said.

Cases have shot up 77 percent since the last report to 6,027, the WHO said last week, with the bulk of them reported in the European region. However, three deaths attributed to the disease have been reported in Africa, the report showed.

The update also showed that over 99 percent of the cases for which gender information was available were among men.

“The outbreak continues to primarily affect men who have sex with men who have reported recent sex with one or multiple male partners, suggesting no signal of sustained transmission beyond these networks for now,” it said.

Not an Airborne Disease

Rochelle Walensk, the director of the Centers for Disease Control and Prevention (CDC), said in June that the virus is not airborne, but rather spreads primarily through face-to-face or skin-to-skin contact with an infected person’s bodily fluids or sores.

“It may also spread through respiratory secretions when people have close, sustained face-to-face contact.”

In the United States, New York has seen the most monkeypox cases with 414 cases, followed by California with 180 cases, and Illinois with 160 cases, according to the data provided by the CDC. The majority of reported cases are attributed to international travel.

Reuters and Meiling Lee contributed to this report.