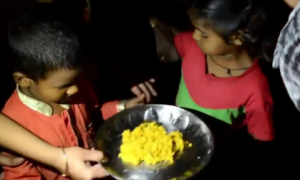 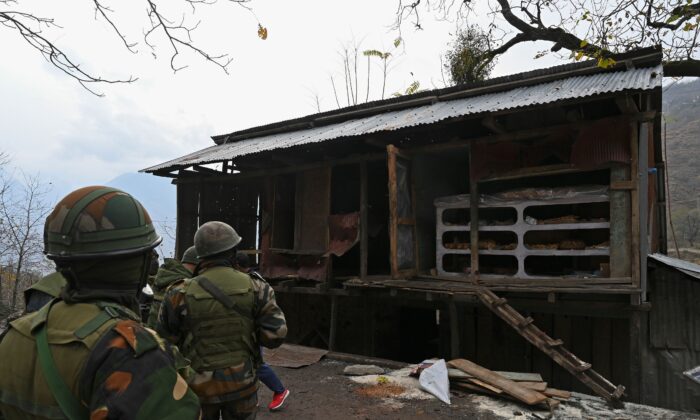 Indian army soldiers inspect shops damaged during Pakistani cross-border shelling at Sultan Daki village near the Line of Control (LOC), the defacto border between Pakistan and India, at Uri some 135 Kms east of Srinagar, on Nov. 14, 2020. (Tauseef Mustafa/AFP via Getty Images)
International

JAMMU, India—India has accused Pakistan of ceasefire violations along the disputed border in Jammu and Kashmir after fierce military clashes on Nov. 13.

“The firing started at 11:30 a.m. and stopped at 3 p.m. It was both artillery as well as mortar gun firing,” Gulam Quadir, 42, a farmer in the Sawjian sector, one of the affected areas on the disputed border inside India in Poonch district, told The Epoch Times by phone.

Quadir said six people were injured in his area—two women, two children, and two porters working with the army.

Daily Excelsior called it one of the “bloodiest days” along the disputed border in northern Kashmir, where the dead included a 7-year-old boy.

India summoned Pakistan’s envoy over the alleged ceasefire violations on Nov. 14 and lodged a protest with Pakistan.

The Public Relations Office of India’s Northern Command in Udhampur shared a picture on Twitter of the four soldiers who were killed on Nov. 13—two in the Gurez sector and two in the Uri sector.

“Spare a thought for our Bravehearts who ensured we celebrate Deepawali in peace & made the Supreme Sacrifice,” the PRO of the Ministry of Defense said as India celebrated the festival of lights, Deepawali, on Nov. 14.

The fifth casualty was confirmed by India’s Border Security Forces that shared a video on Twitter, of the “wreath-laying ceremony” for a soldier at its headquarters in Srinagar.

Amid the clashes, residents of affected villages took shelter in community and individual bunkers—underground defensive residential quarters built by the Indian government for people on disputed borders that experience heavy cross-border shelling.

“It created a lot of panic. Some hid in the jungle nearby. Most took shelter in the community bunkers,” Quadir said.

He said there are five community bunkers in his neighborhood of 102 people and 25 bunkers for 3,600 people in his panchayat [electoral zone] and 12 individual bunkers.

Both India and Pakistan are building thousands of bunkers for their citizens along the disputed border to provide protection during heavy shelling from across the border.

Faiz Rathore, 21, a college student from Mendhar in Poonch district on the Indian side, said the Indian government provides 3.5 lakhs ($4,696) to every family that wants to construct an individual bunker that’s attached to a home.

Mendhar witnesses frequent shelling, Rathore said, which disrupts every facet of life. Bureaucratic delays by local officials have delayed construction on bunkers in the area, he said.

The Indian government has erected a border fence along its international and disputed border with Pakistan. This fence however doesn’t run on the de facto border—at places, it runs a few miles from the boundary, and at others, it runs as far away as 12 miles.

Public movement occurs across the fence line through gates that are open from 9 a.m. to 5 p.m., according to Rathore.

“The fence is for our safety but people living on the other side of the fence don’t have adequate medical facilities and after the gate closes at night, they face extensive difficulties,” he said.

India summoned Pakistan’s envoy over the ceasefire violations on Nov. 14 and lodged a protest with Pakistan while netizens from both the countries mourned the loss of life and property, in a war of words. In turn, Pakistan has accused India of violating the ceasefire.