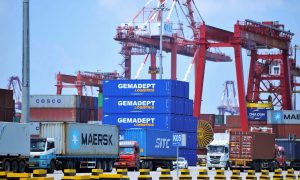 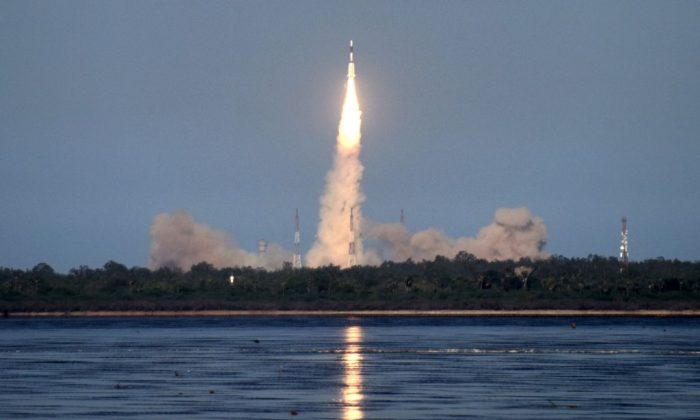 The Indian Space Research Organization's (ISRO) GSAT-9 onboard the Geosynchronous Satellite Launch Vehicle (GSLV-F09), launches in Sriharikota in the state of Andhra Pradesh on May 5, 2017. (Arun Sankar/AFP/Getty Images)
India

India is set to install ground stations for satellite communications in five neighboring countries, a diplomatic move designed to counter China’s influence in the region, according to Indian media.

The five countries are Bhutan, Nepal, Maldives, Bangladesh, and Sri Lanka, according to a Jan. 3 article by India’s English-language daily newspaper The Times of India. Each country will host one large ground station equipped with 7.5-meter antennas, as well as 100 “very small aperture terminals” (VSAT), making possible applications such as television broadcasting, telephony, internet connection, and disaster management.

India has earmarked an estimated 50 million rupees (about $719,000) for the construction of the station and terminals in each country, to be supplemented by additional payments from the host governments.

The station in Bhutan, in the country’s capital Thimphu, will be ready for commissioning Jan. 9 and is expected to be in operation as early as Jan. 15, according to The Times of India, which cited anonymous sources.

The ground stations and terminals in each country are linked to the South Asia Satellite—a 2,230-kg communication satellite (also known as GSAT-9) launched by the Indian Space Research Organization (ISRO) in May 2017. It was built over a period of three years in cooperation with members of the South Asian Association for Regional Cooperation (SAARC), which includes Afghanistan, Bangladesh, Bhutan, India, Nepal, Maldives, and Sri Lanka.

India alone paid for the construction of the satellite at $63 million, after Pakistan, also a member of SAARC, opted not to provide monetary and technical support.

The satellite is part of Indian Prime Minister Narendra Modi’s “neighborhood-first” foreign policy—a way for India to strengthen diplomatic ties with its neighbors in South Asia. The satellite provides services such as communications, tele-education, banking, and television broadcasting, with India providing technical assistance and other know-how to the countries involved.

“The station in Thimphu is seen as India’s counter to the satellite tracking infrastructure created by China in Tibet,” according to The Times of India. The Tibetan region of southwest China shares a 3,380-kilometer (2,100 mile) border with India.

A separate article by The Times of India noted that China’s Tibetan facilities gave it the ability to track India’s satellites and other space assets.

Construction of the space monitoring stations and terminals are being carried out by Indian company Alpha Design Technologies, which specializes in the integration and installation of defense electronics, avionics, and space-satellite systems. It is working in conjunction with ISRO.

“We will even send out our people to help the countries utilize our satellite service. We hosted representatives from all these countries on December 12 in New Delhi to chart out future plans,” said ISRO Chairman Kailasavadivoo Sivan, according to The Times of India.

Aside from the five aforementioned countries, a similar project is being planned for Afghanistan, according to The Times of India.

China has invested heavily in Ngari, a prefecture in Tibet that is several thousand meters above sea level. Ngari is located about 120 kilometers (75 miles) from the Sino-India Line of Actual Control, which separates Indian and Chinese-controlled territory in an area of the Himalayas.

In November 2018, China’s state-run news agency Xinhua reported the opening of a space observatory at Ngari. Located 5,100 meters above sea level, it has eight telescopes.

Also located at Ngari is one of five ground stations inside China to track the Micius satellite, according to the state-run Chinese Academy of Sciences. The satellite, launched in August 2016, is touted by China for its technological advancement in providing quantum communications. The satellite can transmit uncrackable keys from space to provide private communication, according to a 2016 state media report.

China’s projects in Ngari have been in part driven by China’s ambitions to develop cutting-edge science and technology, including quantum computing and space, both of which were highlighted in Beijing’s 13th Five-Year Plan (2016–2020) economic objectives.

Indian news and analysis site The Print warned of the threat against India’s satellites posed by the Ngari satellite tracking station in an article published in March 2018. The article warned that the station “could possibly be expanded to integrate China’s anti-satellite missile weapons,” which could be used to destroy Indian satellites.

The threat posed by China isn’t limited to India. William Carter, deputy director and fellow of the Technology Policy Program at the Washington-based think tank Center for Strategic and International Studies (CSIS), in testimony at a congressional meeting in January 2018, warned of Chinese anti-satellite threats against the United States.

He noted that the Chinese army has tested a range of anti-satellite weapons, including conventional ground-based kinetic kill vehicles. The Chinese have also developed ways to disable satellites.

Beijing has been building up its influence in the Indo-Pacific region through its One Belt, One Road initiative (OBOR, also known as Belt and Road), unveiled in 2013, as it seeks to establish trade routes connecting China with Southeast Asia, Africa, Europe, and Latin America.

China now has control of several ports in the region through leases, including Pakistan’s Gwadar port, Maldives’ Feydhoo Finolhu port and Sri Lanka’s Hambantota port—for which China has a 99-year lease that began in 2017 because the Sri Lankan government couldn’t repay a $6 billion Chinese loan to develop the port.

The Trump administration has recently stepped up its role in Asia, as well as the Indo-Pacific, after U.S. President Donald Trump signed into law the Asia Reassurance Initiative Act on Dec. 31, 2018.

According to a Jan. 1 article by India’s economic daily newspaper The Economic Times, part of the measure calls for closer “strengthening and broadening of diplomatic, economic, and security ties between” India and the United States, which include more cooperation in defense trade and technology.

Despite renewed U.S. support and India’s own increased naval presence, including at the Iranian seaport Chabahar, India is still unsettled by China’s presence in the region, especially after China’s state-run media recently reported that Beijing had begun constructing one of four advanced warships to be delivered to Pakistan—a nuclear-armed country with which India has had historical tensions—as part of an arms deal.

Hindustan Times, in an editorial titled “China’s Indian Ocean Plans Are Decidedly Anti-India,” published on Jan. 4, stated that “China has always seen Pakistan as a balancer against India,” in response to the news about the warships.

It concluded: “With no letup in Chinese hostility, the hesitation in India on balancing China is entirely unwarranted and should be jettisoned.”