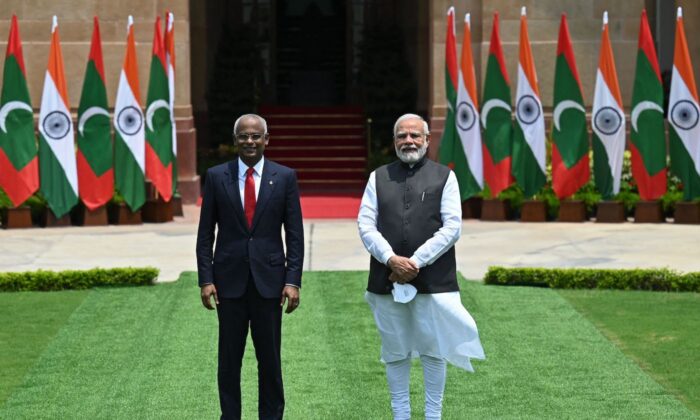 India inked six agreements with the Maldives on Tuesday to expand bilateral cooperation and offered an additional $100 million line of credit to support development projects in the island nation.

Had an excellent meeting with President @ibusolih. We got the opportunity to review the full range of relations between our nations. India cherishes the close friendship with Maldives. We are working closely in areas such as skill development, energy, innovation and more. pic.twitter.com/VVybU9iLDh

The two leaders also launched the Greater Male Connectivity Project, a 4.2 miles (6.74-kilometer)-long bridge and causeway funded by India that will connect the island nation’s capital, Male, to three other islands. It is the largest infrastructure project in the Maldives, costing $500 million.

“We have also decided to provide an additional $100 million line of credit so that all projects can be completed in a time-bound manner,” he added.

Modi said that close India-Maldives relations are vital for the peace and stability of the Indian Ocean, where the threat of transnational crime, terrorism, and drug trafficking has become “serious.”

India also aims to bolster defense cooperation with the island nation by supplying 24 vehicles and one naval boat to the Maldives Security Force and assisting in the construction of police facilities on 61 islands of the Maldives.

“India has been and will continue to be the first responder in any need or crisis of the Maldives,” Modi remarked.

Solih arrived in India on Monday on a four-day official visit. He described the relations between the Maldives and India as “the highest priority,” adding that his country “will always remain a true friend of India.”

Solih has touted an “India-first policy” and pledged full support toward deepening ties with India since taking office in 2018, a departure from his predecessor, Abdullah Yameen Abdul Gayoom, who forged close ties with Beijing.

India was concerned by Yameen’s inclination towards China, which sought to gain more influence in the Indian Ocean. Yameen had pledged support for Beijing’s Belt and Road Initiative, with China investing in many infrastructure projects in the Maldives.

Yameen ruled the Maldives from 2013 to 2018. He was accused of corruption and stifling dissent and the media during his time in office.