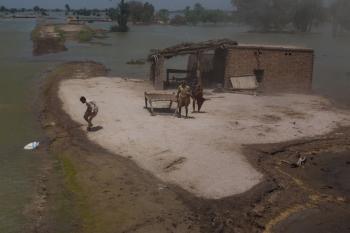 Flood victims scramble for aid relief dropped by a Pakistan Army helicopter on Aug. 22 in the village of Shah Jamaal west of Muzaffargarh in Punjab, Pakistan.(Daniel Berehulak/Getty Images)
World

Helena Zhu
View profile
Follow
biggersmaller
Print
India has said it will give $5 million in aid to Pakistani flood victims in a rare exchange of friendliness between the feuding neighbors.

Pakistani Foreign Minister Shah Mahmood Qureshi told Indian television station NDTV that the government accepted the money, although such a decision took several days to reach because of longstanding strained relations with India.

"Pakistan has conveyed to India its acceptance of the Indian aid. We welcome the decision by Pakistan to accept this offer," Vishnu Prakash, a spokesperson for the foreign affairs ministry, said at a press conference in New Delhi.

Since devastating floods hit Pakistan last month which covered a third of the country's territory, 20 million people have been adversely affected, according to the United Nations.

U.N. Secretary-General Ban Ki-Moon appealed for $460 million in emergency relief to help the flood victims, saying that the floods are the worst disaster he has ever seen.