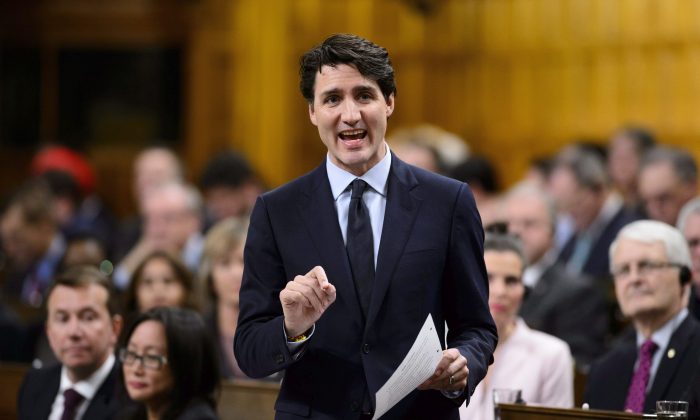 Prime Minister Justin Trudeau speaks during question period in the House of Commons on Feb. 27, 2018. (The Canadian Press/Sean Kilpatrick)
Canada

OTTAWA—Justin Trudeau doubled down Feb. 28 on his support for a senior government official who suggested factions in the Indian government sabotaged the prime minister’s trip to India last week—despite a flat denial from India’s external affairs ministry which labelled the theory “baseless and unacceptable.”

And he got some back-up from a leading Sikh politician in India, who alleged that Indian intelligence agencies hatched a conspiracy to ruin Trudeau’s visit and brand him as a supporter of Sikh separatists.

Trudeau got no help at home, however. For the second consecutive day, opposition parties roasted him for his insistence that the official—revealed by the Conservatives to be the prime minister’s national security adviser, Daniel Jean—is a member of the professional, non-partisan public service whose advice should be respected and believed.

They accused Trudeau of provoking a diplomatic crisis with India in a desperate bid to deflect blame for his trouble-plagued, eight-day tour of the country, which hit bottom with the revelation that a convicted attempted murderer and one-time Sikh separatist extremist had been invited to two events with the prime minister.

“There has never been a government, Liberal or Conservative, who has used a national security official to clean up an embarrassing mess that was self-inflicted by this prime minister,” Conservative Leader Andrew Scheer told the House of Commons.

“Is the prime minister trying to create an international diplomatic crisis?” she asked.

Jaspal Atwal, a B.C. Sikh convicted of trying to kill an Indian cabinet minister in 1986, attended a reception in Mumbai, where he was photographed with Trudeau’s wife. An invitation to a later reception in New Delhi was rescinded as soon as news broke that Atwal was on the guest list.

In a background briefing arranged by the Prime Minister’s Office in the midst of the furor over the invitations, Jean suggested Atwal’s presence was arranged by factions within the Indian government who want to prevent Prime Minister Narendra Modi from getting too cosy with a foreign government they believe is not committed to a united India.

An official spokesman for the Indian ministry repudiated that theory Feb. 28.

“Let me categorically state that the government of India, including the security agencies, had nothing to do with the presence of Jaspal Atwal at the event hosted by the Canadian high commissioner in Mumbai or the invitation issued to him for the Canadian high commissioner’s reception in New Delhi,” Raveesh Kumar said in a brief statement posted on the ministry website.

“Any suggestion to the contrary is baseless and unacceptable.”

But that statement was contradicted by Manjit Singh GK, head of the Delhi unit of a Sikh political party that is allied with Modi’s party.

“Sikhs could never imagine that the PM of a country which provided them opportunities of employment and growth would be treated so badly by the Indian government,” he said in a statement reported by The Times of India.

According to The Times, GK agreed that Atwal had “close links” with Indian diplomatic officials and that certain people within the Indian government “were behind the episode which embarrassed the Canadian PM.” He pointed out that Atwal had met various officials in government agencies during a visit to India last August, including the national spokesperson for Modi’s party.

In the House of Commons, Trudeau did not back down on his support for Jean. Unlike the Conservatives, whom he accused of politicizing the public service at every opportunity, Trudeau asserted that his Liberal government respects and appreciates the work done by professional, non-partisan public servants, “particularly those in the national security and information areas.”

Scheer questioned how Trudeau can simultaneously blame rogue elements in the Indian government for Atwal’s presence on the trip as well as British Columbia Liberal MP Randeep Sarai, who has taken responsibility for inviting Atwal and apologized for his lack of judgment. On Feb. 27, Trudeau accepted Sarai’s resignation as chair of the Liberals’ B.C. caucus.

“Is the prime minister actually saying that (Sarai) has taken sole responsibility for a scheme concocted by the Indian government? … How can they both be true?” Scheer asked.

Atwal, a one-time member of a Sikh separatist group that is banned in Canada and India as a terrorist organization, was convicted of attempting to kill Indian cabinet minister Malkiat Singh Sidhu on Vancouver Island in 1986.

He was also charged, but not convicted, in connection with a 1985 attack on Ujjal Dosanjh, a staunch opponent of the Sikh separatist movement who later became B.C. premier and a federal Liberal cabinet minister.