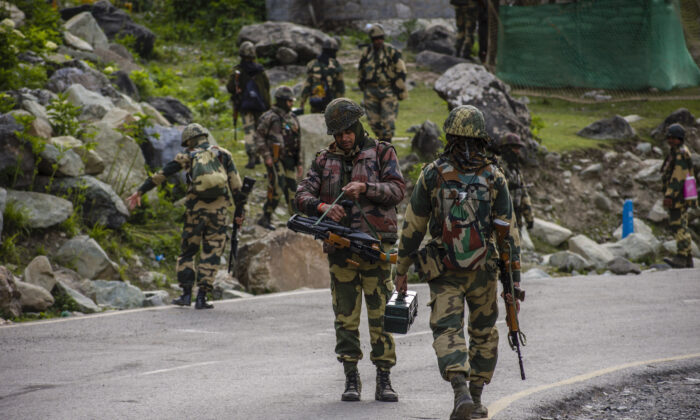 Indian and Chinese troops have begun to disengage from a disputed Himalayan border area after engaging in 16 rounds of military talks to resolve friction stemming from deadly clashes in 2020.

The Indian Defense Ministry said in a Sept. 8 statement that both sides have agreed to withdraw troops from the Gogra-Hotsprings area of eastern Ladakh in “a coordinated and planned way.”

The announcement was made ahead of the Shanghai Cooperation Organization’s (SCO) annual summit in Uzbekistan this week, which will be attended by Indian Prime Minister Narendra Modi and Chinese leader Xi Jinping.

Indian Foreign Ministry spokesman Arindam Bagchi said the commanders from both sides have been in regular contact after reaching a consensus in July to disengage troops and cease forward deployments in the area.

The withdrawal process will be completed by Sept. 12. Bagchi said the line of actual control (LAC) in the area will be “strictly observed” and respected by both sides to prevent any unilateral changes to the status quo.

“It has been agreed that all temporary structures and other allied infrastructure created in the area by both sides will be dismantled and mutually verified. The landforms in the area will be restored to the pre-stand-off period by both sides,” he said.

The LAC is a notional line of demarcation between Indian-controlled territory and the Chinese-controlled area.

Bagchi said the two countries also agreed to resolve the remaining issues along the LAC following clashes in the Galwan region of the Himalayas in June 2020 that left 20 Indian and four Chinese soldiers dead.

The 2020 conflict led to a heavy military buildup from both sides of the disputed border and strained relations. India said restoring normalcy with China is impossible if the border situation remains unresolved.

Claude Arpi, a French-born Tibetologist residing in India, said the border dispute finds its roots in Mao Zedong, the Chinese Communist Party’s (CCP) first leader, and his conquest designs in the western regions of Xinjiang and Tibet.

Mao came to power in 1949. By the time the CCP finished its conquest of Tibet from 1951 to 1952, Mao realized that Aksai Chin, the desert area in the north of Ladakh, was extremely important strategically for the regime’s future.

“It was an uninhabited area, nobody could live there, but the Chinese decided to build a road there because it was the easiest way to connect the two new provinces [of Tibet and Xinjiang],” Arpi told The Epoch Times in April. “That’s how in Aksai Chin today’s Chinese Highway G219 came into being. [It] was surveyed in 1952–53, China started building it in 1954, and it was inaugurated in July 1957.

The Epoch Times has obtained a booklet published by the government of India in 1963, “Chinese Aggression in Maps.” It’s a cartographic description of how, without provocation, the CCP entered the uninhabited Indian territory of Aksai Chai and how the Chinese claim lines unilaterally continued to change from 1956 to 1962.

The Indian administration stated in its booklet that the Chinese were claiming boundary lines in Ladakh according to their “bargaining convenience and progressively increasing extent of occupation of Indian territory through force.”

Arpi said even the international community was taken unaware of the Chinese activities in this desolate part of the world.

“The Soviet Union might have known, but by that time, it was no more their ‘business,’” he said.

“And after that, the 1962 war took place, the PLA [People’s Liberation Army] pushed south and occupied some other places that they have not vacated to date. China vacated some areas and some didn’t vacate. In the end, where is the LAC?”